Anaïs Mitchell’s storytelling skills shine through in an understated album

Amidst the bloated and razzmatazz of Frank Sinatra’s “Theme from New York, New York” lies a mystery. “If I can make it there, I’ll make it anywhere,” cried Sinatra, in the role of a small-town wannabe with big dreams. But what happens after you conquer New York? Prove that you can make it anywhere by moving to Ulaanbaatar? Stay and be dethroned by the next wave of small-town stewards? Or bank the victory and retire in glory?

On her self-titled new album, Anaïs Mitchell opt for the latter action. This is her first solo studio album of new material since 2012’s Young man in America, an impressive treatment of American culture of ambition centered on a protagonist born as “hungry as a prairie dog”. The decade-long gap between it and Anaïs Mitchell follows the triumph of her hit Broadway musical Hadestown, which won eight Tony Awards in 2019. Based in Brooklyn at the time, the Vermont-enriched singer-songwriter lived out her own version of Sinatra’s folk song. She was the toast of her adopted town.

Anaïs Mitchell opens with a New York song. “Brooklyn Bridge” makes Mitchell portray the role of a woman sitting with her partner in the back of a taxi as they cross the East River. “I want to be someone, want to be one in a million,” she sings. So far, so Sinatra – but here’s no bloating or razzmatazz. The song’s narrator is not washed up with worldly success, but rather cherishes the satisfaction that she “finally got you by my side”. Subdued rhythmic swells and murmured melodies give the song’s sense of accomplishment a calm attitude. The brass and blaring of “Theme from New York, New York”, his macho peacocks, are deliberately absent. 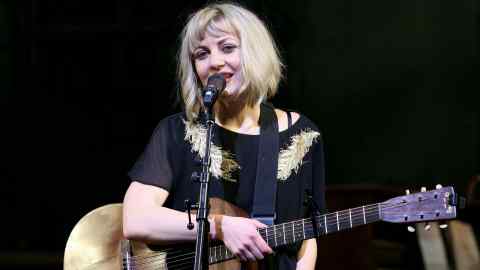 Subsequent songs shift the action to an environment where birds singing are rhymed with church bells ringing. There’s the soft beat of acoustic guitars and muted drums. The inspiration is Mitchell’s move from New York back to her home state of Vermont in 2020. In the album’s depiction, she does not return as the winner of Broadway, but as a married woman near 40 with a small child and a baby on the way.

She gets a glimpse of herself in a reflection that looks like her own mother in “Little Big Girl.” “Backroads” is about teenage high jinks in the small town of her youth. “You might be someone, one day,” she sings. The cliché is saved by unexpected chord changes and a seductive sense of groove derived from the classic era of 1970s singer-songwriters.

Produced by Josh Kaufman, a member of her folk orchestra side project Bonnie Light Rider, the 10 songs last just over 30 minutes, including a rearranged cover of the previously released “Now You Know”. The album’s purposeful understated air sometimes becomes unintentionally overwhelming. But Mitchell’s voice has a sharp edge that keeps saccharine sentiments away, while her storytelling skills shine through on tracks like “Little Big Girl.” The traits that helped her take Manhattan are present Anaïs Mitchell, even if it is in muted form.