Join myFT Daily Digest to be the first to know about media news.

Veteran broadcaster Andrew Neil has resigned as chairman and presenter of GB News just three months after the channel first aired, the clearest sign of friction at the right-wing British television station.

GB News confirmed Neil’s departure on Monday after people close to the channel said the 72-year-old journalist’s relationship with the station’s chief, Angelos Frangopoulos, had broken down.

Neil’s departure has raised questions about the future of the station and its other providers. The main role of the media heavyweight helped to persuade other well-known TV personalities to participate the project, including former BBC journalist Simon McCoy and Kirsty Gallacher, formerly of Sky Sports News.

His resignation indicates tensions between those on the channel, led by Neil, who believed it should be a central but mainstream alternative to the BBC and Sky, and another faction that would like a more populist approach .

GB News has made a series of changes to its schedule, including the introduction of Nigel Farage, former leader of the British Independence Party, as an excellent presenter. Broadcasters who expressed skepticism about the closure of coronavirus were brought on board, as were political commentator Patrick Christys and comedian Mark Dolan.

Since its launch, the channel has been plagued by technical glitches and other production problems that have caused further friction.

In a statement, Neil said: ‘I’m sorry to leave, but I’ll come to the conclusion that it’s time to reduce my commitments on a number of fronts. During the summer, I had time to reflect on my extensive portfolio of interests and decided it was time to return. ”

He added: “I wish GB News well in fulfilling its founding promise and mission to reach the audience currently serving existing news outlets.”

Neil leaves the BBC last year as chairman of GB News, whose investors include the American media group Discovery. He also presented a first program for politics and news.

But the launch of the station in June caused problems, and two weeks later Neil took a breather and has not appeared on the channel since. 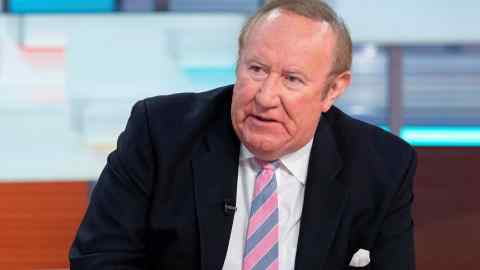 GB News said: ‘Andrew is without a doubt one of the best journalists and interviewers in this country. GB News thanks him for his 12 months of leadership, wisdom and advice and we wish him well. ”

The station added that Neil would contribute to GB News as a ‘regular gas commentator’.

Neil was a founder of Rupert Murdoch’s Sky TV and former editor of The Sunday Times before becoming a star political presenter at the BBC.

At the time of the launch of GB News, he promised that it would provide an anti-establishment ethos that would challenge British news broadcasting orthodoxy.

At the same time, he also said that the station would not be home to “false news, lies, disinformation, distortion of the facts and conspiracy theories”.