We will send you a myFT Daily Digest e-mail to deal with the latest trade news in the UK every morning.

The British government is facing new allegations from MPs that they have not fulfilled its promise to set up an independent commission.

The complaints came as it appears that there is a further delay in the Trade and Agriculture Commission placed on a statutory basis, despite the fact that the government wants to sign trade agreements with Australia and New Zealand.

The government agreed in July 2020 to set up the commission to reduce fears in the UK farming industry that trade transactions would lead to lower UK animal and environmental standards.

It was initially set up for six months and has a report set out in March how to balance the competing interests of British farmers, consumers and the government’s international trade ambitions.

The commission must be placed by the government on a statutory basis, but it has yet to happen, leaving MPs and industry groups in doubt about the commitment of ministers to have an effective oversight body.

“We are concerned that the government is deliberately setting the clock to [trade and agriculture commission] to allow difficult concessions to be made [in trade deals] without the statutory oversight mechanisms, ”he told Liz Truss, then the international trade secretary.

He expressed concern to Truss slow down place the commission on a statutory basis to consider whether its members should be paid for their work.

Truss said that an interim commission would rather be set up to provide the assurance that the move would not undermine or change the body’s role until the salary question was finalized.

However, the industry is skeptical about whether the government wants to take the commission seriously.

Nick von Westenholz, trade strategy director of the National Farmers’ Union and a member of the commission during its early stages, said it was a ‘great shame’ that the government had not even agreed on a set of ‘core standards’ to strike. trade transactions. 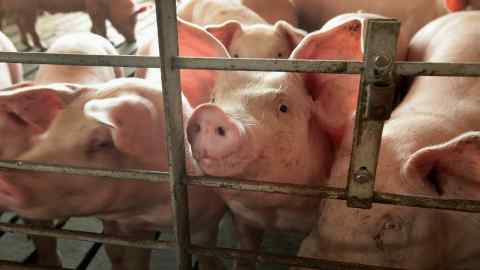 Environmental groups have also said that quick trade agreements with countries that have lower standards and do not take environmental production costs into account will lead to British policies that run counter to the government’s climate change goals.

Gwen Buck, trade expert for Greener UK, a coalition of 12 groups, including the RSPB, Greenpeace and the National Trust, said the government’s policies were driven by the need for ‘short-term political victories’.

The Department of Agriculture said it was “grateful” for the commission’s report and that its response would be published “soon”. ” The new commission for trade and agriculture will play an important role in investigating trade agreements after signing, ” he said.