The Austrian government has outlined a plan to impose new taxes on carbon emissions, which in turn will fund tax cuts for middle-class earners in a move that hopes Chancellor Sebastian Kurz hopes to breathe life into his coalition government’s green-conservative agenda.

From July next year, Austrians will be taxed at € 30 per tonne of carbon, which will rise to € 55 by 2025, Kurz said. The measure will initially lead to an extra cost of 10 cents per liter at filling stations and also € 130 more for the average Austrian household’s annual heating costs.

“We said we want to give relief to everyone who works, especially low- and middle-income workers, families and retirees who have worked all their lives,” Kurz said.

The two measures highlight the delicate balance between EU governments seeking to shift consumers from CO2-intensive spending, while fuel protests such as the yellow jackets which shocked France for months in 2018. Austria’s chancellors said Kurz was particularly wary of causing such a setback in Austria as frustrations over pandemic – related restrictions increased.

Austria, along with other EU states, incurs a cost of CO2 emissions. German legislation that came into force this year set a price of € 25 per tonne, rising to € 55 by 2025. France has a carbon tax of € 45 per tonne, and the Netherlands € 30.

The EU-wide Emissions Trading Scheme (ETS) applies a carbon price to major industrial pollutants and generators by allocating tradable allowances. The price for these grants more than € 64 reached last week. One allowance gives the container the right to emit one tonne of CO2.

“Less dirt in the air, more money in the state coffers,” said Vice Chancellor Werner Kogler, leader of the Austrian Green Party, who announced the measures on Sunday with Kurz.

However, Austria’s opposition parties were universal in their criticism of the proposals.

The Social Democrats argued that the package benefits the interests of big business: under the plan, some big issuers will receive exemptions. The effect of inflation and fiscal drag will wipe out the profits for low- and middle-income taxpayers within two years, their party spokesman Jan Krainer said.

Herbert Kickl, leader of the right-wing populist Freedom Party, said the tax reform was a mere sham. . . a penalty package for Austrian taxpayers “. 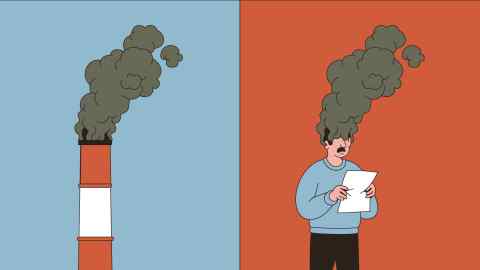 A prominent study in the scientific journal Nature estimates that a price of € 120 per tonne is needed by 2030 to decarbonise the economies by 2050, in line with EU targets.

The tax deal follows months of tense negotiations between Kurz’s Conservative People’s Party and the greens that have become available, and the federal budget is due to be submitted to parliament next week. Kurz had to cancel a trip to Spain this weekend to finalize the terms with his coalition partners.

For Kurz, the deal is politically sensitive. Opinion polls for his party have dropped over the past 18 months. The party is voting in favor of 35 percent, compared to 44 percent in May 2020. Last weekend the regional elections took place vaccine skeptics preferred in Upper Austria and the Communist Party takes control of the second city of Austria, Graz.

Are you curious about the sustainability commitments of the FT? Read more about our scientific goals here