Join myFT Daily Digest to be the first to know about wine news.

When writing tasting notes on wines of which I know the prices, it is my practice to add GV or even VGV to those that I think have good or very good value.

I tasted a wide variety of Austrian wines the other day and I sprinkled GVs like confetti on the red. Granted, many are listed by The Wine Association in the UK, which in particular does not recognize its pricing policy. But I’m not the only one who thinks that Red Austria is too expensive in general.

‘The increase over time, which is reflected in secondary market prices, is also too small. Good for the consumer, not for the retailer. Just a pity that Austrian consumers are hardly willing to wait until the wine ripens and really shows its potential and complexity. Therefore, a few years ago we started investing in the best Austrian red wines that are released from our cellars at least five years after the release from the cellars.

“With Blaufränkisch we have a fantastic local grape variety in terms of longevity. . . I’m sure it’s just a matter of time before it is widely recognized and reflected in prices. ”

Only a handful of Austrian reds sell for more than € 100 per bottle in Austria, and they tend to be closer to the concentrated, oaky red style of Austrians in the past, rather than in fresher contemporary styles. Obvious examples are René Pöckl’s Mystique blend, The Wild Boys of Club Batonnage’s blend, Clemens Strobl’s Hengstberg Pinot Noir and the wines of Schloss Halbturn. This may be because Austria is so closely linked to white wines, especially those of their own Grüner Veltliner grapes, that red prices have declined.

Like most wine-producing countries at the end of the last century, Austria underwent a phase of improper worship of French grape varieties at the expense of their own. There was also a clear fashion for raising blends, or cuvées, of local grapes with, for example, Cabernet or Merlot above single-variety wines. But over the last ten years, Blaufränkisch grapes have been increasingly recognized as an Austrian specialty to be proud of.

Many of the country’s most respected reds are now made exclusively from Blaufränkisch. It is the grape known as Kékfrankos across the border in Hungary and Frankovka and Limberger elsewhere. It produces deep-colored wines with a real character (red fruit and pepper), tannin (so that they have a long life), as well as freshness and the ability to express terroir, both fashionable 21st-century characteristics. The wines can be very different and remind me of a typical Beaujolais Cru, a fine red burgundy and, with those with the most backbone, a Syrah from the northern Rhône. 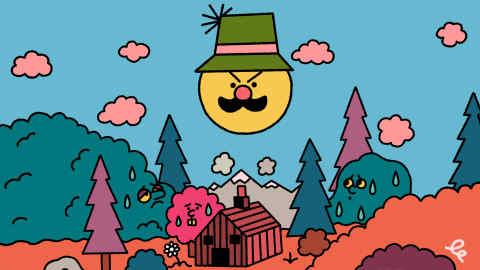 The variety, which has now grown from the state of Washington to the Adelaide Hills, is best home in Burgenland in the far east of Austria, with the peel and limestone of Leithaberg and the iron soil of Eisenberg providing the raw material for interesting deviations. A little height helps to soften the heat of Pannonia from Hungary. The Blaufränkisch Revolution probably began in the early 2010s in the higher places of Mittelburgenland, with Roland Velich’s geographically distinct bottles under the Moric label, although wines by Ernst Triebaumer and Uwe Schiefer had already paved the way. The vine is left to ripen, which is not a bad thing in a country where the harvest starts earlier each year.

The other hotspot for Blaufränkisch is Carnuntum, where Gerhard Markowitsch has long been the big name. Now Dorli Muhr joins him, who gradually and cunningly contributed to her grandmother’s vine on the slopes of Spitzerberg. Knowing that most of Carnuntum’s finest old vines were traditionally cared for by senior peasants, she advertised for land in the local doctor’s waiting room and church magazine. She is convinced of Blaufränkisch’s age, and if she could convince her accountant, she would only sell her 2012s now.

From the 2019 vintage, The Wine Society presents ‘The Society’s Blaufränkisch’, produced by Hans Igler near the Hungarian border in Mittelburgenland and is the same as its classic bottling. Igler is located slightly east of the famous Hungarian wine town of Sopron, which is the capital of Kékfrankos (grape varieties do not respect political boundaries). A taste of four older vintages shows how well Blaufränkisch ages. Yet the 2006, 2013 and 2017 were all sold by The Wine Society for less than £ 12 per bottle. Similarly, older vintages made on the famous biodynamic Birgit Braunstein estate in Leithaberg were offered for less than £ 20 per bottle.

Next year, Riedl is planning an event where some influential professionals will compare the best examples of Austrian Blaufränkisch with some of the world’s most celebrated red wines.

Yet it is by no means only Blaufränkisch that makes Austrian reds important. The country’s most common red wine grape is Zweigelt, a cross in the 1920s between Blaufränkisch and another Austrian red wine grape, St Laurent. It certainly did not get the respect of his most famous parent, but I’m a fan. It can produce exuberantly fruity wines that are full of charm in their youth. And St Laurent itself can produce velvety, flattering wines that look a bit like Pinot Noir on steroids.

All in all, Austria is a rich hunting ground for lovers of red wine – especially those looking for reds that are not too alcoholic. Of the 22 Austrian reds I tasted, only one was as strong as 14 percent – and that 2006 tasted like a blast from the past – while six had alcohol levels of 12 percent or 12.5 percent.

Heaven knows how they do it in the continental climate of Austria, especially in Burgenland, where summer days can be quite dull. But national pride in the freshness of their wines finds this taste as justified.