Beijing tightens Covid restrictions in parts of capital ahead of Olympics

Government officials have tightened Covid-19 restrictions in parts of Beijing, as China steps up efforts to prevent any disruption to the Winter Olympics next month.

The local organizing committee has previously admitted that some cases would probably be imported, given the number of overseas athletes, media and officials due to arrive in the city. But authorities have sought to mitigate the risk of contagion by creating a “closed loop” for the Olympics, designed to effectively prevent any crossover between the Games’ participants and the local community.

China reported that 25 new local cases and 23 infections were recorded within the Olympic bubble on Thursday, highlighting the challenge authorities face to maintain Beijing’s zero-Covid policy.

“Omicron is proving to be a lot more difficult in terms of its transmissibility,” said Karen Grépin, an expert in public health policy at the University of Hong Kong.

“Coupled with the fact that the Olympics is happening at a time when cases globally are at an all-time high, it will be a challenge” to maintain the Covid policy, she added.

Chinese President Xi Jinping and Thomas Bach, President of the International Olympic Committee, discussed Covid containment plans on Wednesday in Beijing. The meeting was a rare face-to-face meeting with a foreign official for Xi, who has not left the country since early 2020.

The IOC has been criticized for its dealings with China after it did not back an investigation into tennis star Peng Shuai’s allegations of sexual assault against a senior Communist party official last year. Bach held a virtual meeting with Peng in November, after she had largely disappeared from public view.

The IOC said Bach and Emma Terho, chair of the IOC Athletes’ Commission, would see Peng during the games and had held discussions with her this week, during which she said she was “looking forward” to the meeting. 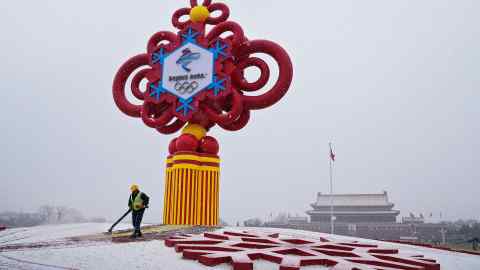 International human rights groups have increased their pressure on governments to boycott games in protest against alleged human rights abuses undertaken by Chinese authorities against the Uyghur minority in Xinjiang. Human Rights Watch on Thursday criticized Beijing for its alleged use of forced labor in the region “in violation of international law”.

Several countries have already announced a diplomatic boycott of the Games, including the UK, US, Australia and Canada.

The new restrictions were imposed in the Fengtai district after seven new cases were reported in the area, according to local authorities. At least six other neighborhoods in the district have enforced similar control measures.