Sérgio Moro, the former judge who led a sweeping anti-graft crackdown in Brazil, has pulled out of the presidential race, dashing hopes the centrist politician might break the left-right polarization in Latin America’s biggest democracy.

For years Moro was one of the country’s most popular public figures as he presided over trials in the Lava Jato, or “Car Wash”, corruption probe. But he has struggled to gain traction in the political arena, with an approval rating stuck in single digits after months of campaign-style events.

His exit will be a blow to those seeking a “third way” candidate to challenge what looks likely to be a two-horse race between incumbent far-right president Jair Bolsonaro and leftwing former leader Luiz Inácio Lula da Silva.

“I will be a soldier of democracy to recover the dream of a better Brazil,” wrote the 49-year-old Moro on social media, announcing his exit from the presidential race as he joined a new political party.

Many expect the native of the southern state of Paraná to instead contest a seat in Congress in the October elections.

Opinion polls show a firm lead for Lula, who served two terms between 2003 and 2010, although Bolsonaro has begun to narrow the gap in recent months.

Members of Brazil’s influential business community and investors say they would prefer a centrist politician committed to economic reform and without the divisiveness of the two frontrunners.

“Moro’s departure tends to favor Bolsonaro,” said Adriano Laureno, analyst at the consultancy Prospectiva. “Both because of the natural migration of anti-corruption votes. . . and because Moro’s departure was not communicated in the best way to favor third-way candidates. ” 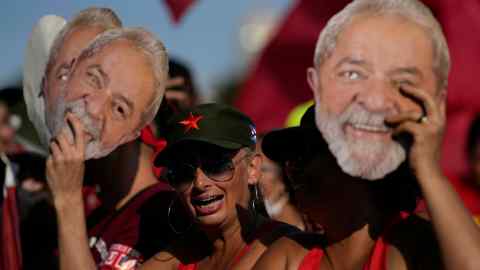 The viability of an outside candidacy appeared to narrow further on Thursday, as speculation circulated that João Doria, the conservative governor of São Paulo, might also pull out of the race.

“In the end, it only fuels the polarization between Bolsonaro and Lula,” said Mario Braga, an analyst at Control Risks.

Moro rose to prominence during the Lava Jato proceedings, which uncovered a massive kickbacks-for-contracts scheme that sucked billions of dollars out of Petrobrasthe state-controlled oil company.

The investigations led to the arrest of dozens of high-profile businessmen and politicians as well as the arrest of two former presidents, including Lula. The former trade unionist returned to the political stage last year, after his corruption convictions were annulled on a legal technicality.

The legacy of the Lava Jato probe was also tarnished by leaked audio files that appeared to show Moro coaching prosecutors on how best to secure convictions.

After an acrimonious stint as justice minister in the Bolsonaro administration, Moro worked as a consultant in the US before returning to Brazil in November to launch his political career. He struggled, however, to resonate with the electorate and his approval rating has gradually declined from 15 per cent to as low as 7 per cent.

He also received little support from the political establishment, many of whom were investigated as part of the Lava Jato probe.

“Moro understood the difficulty of having a coalition around his name and decided to migrate to another party and run as congressman where he can be successful,” said Lucas de Aragão, a partner at consultancy Arko Advice.