China’s top economic official intervened on Wednesday to reassure investors, saying Beijing would take measures to support the economy and financial markets after a sharp sell-off that has accelerated in the wake of Russia’s invasion of Ukraine.

Liu He, a vice-premier and President Xi Jinping’s closest economic adviser, said the government would take measures to “boost the economy in the first quarter”, as well as introduce “policies that are favorable to the market”. He did not elaborate on what specific measures would be taken.

Liu made the comments after convening a special meeting of the State Council’s Financial Stability and Development Committee, which he chairs, according to a summary of the meeting published by Xinhua, China’s official news agency. The FSDC oversees the country’s main financial regulators, including the central bank and securities watchdog, and meets regularly but such a wide-ranging statement to boost confidence is rare.

Investors in Shanghai, Shenzhen and Hong Kong – as well as in US-listed Chinese companies – have been spooked by slowing economic growth, the inflationary aftershocks of the Ukraine war and a long-running crackdown by Xi’s administration on previously fast-growing companies in the technology, education and property sectors.

The meeting overseen by Liu addressed a wide range of issues that have added to uncertainty about China’s economy. Beijing should speed up and quickly complete the rectification of the country’s big tech platforms while making sure policies are transparent and clear, according to the Xinhua summary of the meeting.

The Hang Seng Tech index jumped more than 20 per cent following the meeting, with shares of Alibaba and Tencent, China’s two biggest internet groups, rising 25 per cent and 24 per cent respectively.

The CSI 300 index, which tracks the largest listed companies in Shanghai and Shenzhen, was up 4.3 per cent in late afternoon trading after falling more than 13 per cent following Russia’s invasion of Ukraine on February 24.

Ming Liao of Prospect Avenue Capital said: “With the market sell-off and bad economic situation they decided to take action.”

He added: “They made it clear that China will solve the delisting issue for tech companies in the US, but I do not think regulation of platform companies will fully come to an end. It may be more subtle in the future. ” 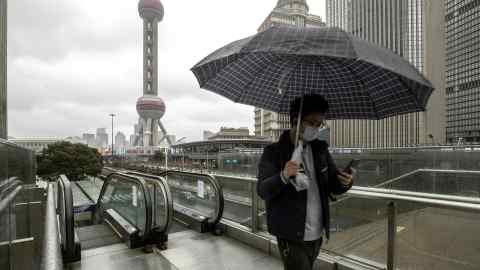 The planned delisting of Chinese companies in New York over access to audit records has also weighed heavily on their shares, with the sell-off accelerating after the US Securities and Exchange Commission named the first of up to 270 groups that will be targeted if they do not hand over audit documents.

The FSDC said it had made progress on the issue with the SEC and they were working on a plan to resolve the stand-off.

“The Chinese government supports companies from across industries to list abroad,” the meeting summary said.

The committee also urged regulatory agencies to roll out policies beneficial to the economy and be wary about undertaking policies that detract from growth.

“For any policy that will have an impact on financial markets, it should first be co-ordinated with financial regulators,” the committee said.