China’s patchy vaccination campaign has left half of its elderly population exposed to a higher risk of severe Covid-19, just as the country tackles surging outbreaks of the highly infectious Omicron variant in Shanghai and other regions.

Shanghai began on Monday a two-phase lockdown of all 26mn of its residents to combat a wave of largely asymptomatic cases that have been rapidly multiplying in the community.

Hong Kong lost control of a similar surge in January, in which more than 1mn of its 7.4mn residents were infected. But while the territory has a closed border with the rest of China, Shanghai does not, meaning it is more likely cases will spread beyond the city, with potentially devastating consequences for the elderly.

More than 130mn Chinese aged 60 and above are either unvaccinated or have received fewer than three doses, which, according to a University of Hong Kong (HKU) study, puts them in greater danger of developing severe Covid symptoms or dying if they contract the virus .

China’s homegrown Sinovac jab was found to be less effective in preventing death from Covid among the elderly than the internationally developed BioNTech / Pfizer inoculation, unless they received three shots. The vast majority of the population has been jabbed with either Sinovac or Sinopharm vaccine, which researchers said also required a triple dose.

That vast scale of China’s exposed elderly population – greater than the entire population of Japan – has prompted officials to enforce localized lockdown measures in a push to stamp out outbreaks across multiple cities including Jilin and Shenzhen.

Ben Cowling, an epidemiologist at HKU and one of the study’s authors, said three jabs of inactivated inoculation “gives a very high level of protection”. This conclusion, even though it highlights the efficacy of domestic vaccines against Omicron, will worry public health officials in China, where only 20 per cent of those aged 80 and above have received three doses.

Beijing increased its efforts to administer a third inoculation to the elderly towards the end of 2021, when Covid evaded its strict border controls. But experts said the country’s success in containing the virus, coupled with the older population’s suspicion of western medicine, had undermined the vaccination drive.

“The early success of the zero-covid policy created a false sense of security among the elderly,” said Yanzhong Huang, a public health policy expert at the Council on Foreign Relations in New York.

“Many older people thought ‘there is no virus, why bother getting vaccinated and risk suffering from the side-effects?’,” He added. This view was echoed by several people interviewed by the Financial Times whose elderly family members had resisted the vaccine.

“My parents and grandparents refuse to get vaccinated,” said a tech employee in her twenties in Guangdong who did not want to be named. “They do not listen to government scientific advice. They do not trust the vaccines and prefer traditional Chinese medicine remedies, ”she added.

A staff member at a Beijing elderly care facility said most residents had either not been vaccinated or had not received the third jab. “Some families are unwilling to get their relatives vaccinated. They’re concerned about the possible side-effects, ”he said.

Huang said vaccine hesitancy was particularly prevalent in rural areas, which are vulnerable in the event of an uncontrolled outbreak given the scarcity of hospitals and doctors in the countryside.

Mainland China’s coverage is better than that of Hong Kong, where 69 per cent of residents aged 80 and above were unvaccinated in early February. Omicron has since torn through the elderly unvaccinated population, leaving the territory with the highest number of deaths compared with population size in the world. 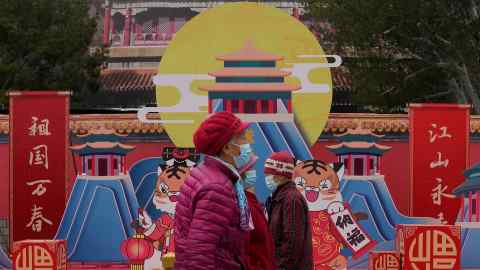 China recorded more than 65,900 cases over the past fortnight, forcing several cities to implement localized lockdowns as officials tried to avoid the same fate that command Hong Kong. These measures appear to have protected the most vulnerable. The country has had only two Covid fatalities this month, according to official statistics.

But experts said the large under-vaccinated elderly population meant officials would impose ever-tougher restrictions. “Until the costs exceed the benefits, the government has no choice to give up zero-Covid,” said Huang.