Europe’s top human rights body has launched disciplinary action against Turkey for its refusal to release a captured businessman and philanthropist, inflicting a new symbolic blow on the country’s relations with the west.

The decision limits a difficult week for President Recep Tayyip Erdogan, who was resignation of his finance minister against the backdrop of a currency crisis that has caused the lira to lose 40 percent of its value against the dollar over the past three months.

The Council of Europe has strongly voted in favor of launching “infringement” proceedings against Ankara over the detention of Osman Kavala, who remained behind bars even after an order of the European Court of Human Rights for his release.

The breach process – which diplomats say is likely to last at least 18 months – could eventually lead to a suspension of Turkey’s voting rights at the Council of Europe, which oversees the ECHR.

It could even lead to the country’s suspension from the Strasbourg – based institution of which it has been a part since 1950, which severed a crucial link between Turkey and Europe at a time when its hopes of joining the EU had faded.

Kavala, who is being held for four years without any conviction, was in the middle of a recent row between Erdogan and 10 Western nations after signing a joint declaration calling for his release. Turkey has accused the Council of Europe of pursuing a “biased and selective approach” to enforcing ECHR rulings.

The decision came after Erdogan faced a turbulent week on the domestic front, with growing public dissatisfaction over rising living costs and growing accusations that his government was manipulating inflation data.

Kemal Kilicdaroglu, the leader of Turkey’s main opposition party, on Friday contributed to the pressure on the government by paying a visit to the statistical agency, as new official data says inflation rose by 21 percent in November.

The latest figure was higher than analysts’ forecast of 20.7 percent. But Kilicdaroglu, who stood outside the closed gates of TurkStat after officials refused to allow him a meeting, accused the agency of manipulating the data. “TurkStat has ceased to be a state institution and has an institution of the [presidential] palace, ”he said.

The lira has suffered its worst dive since a 2018 currency crisis after the central bank, which acted on behalf of Erdogan, began. lower interest rates in September despite rising inflation.

The Turkish president has long believed, in contrast to established economic orthodoxy, that high interest rates are causing inflation rather than helping to reduce it.

He insisted that more interest rate cuts would follow, in light of warnings that, in a country that is heavily dependent on imported energy and raw materials, an ever-weakening lira could cause a vicious cycle of currency depreciation and inflation. 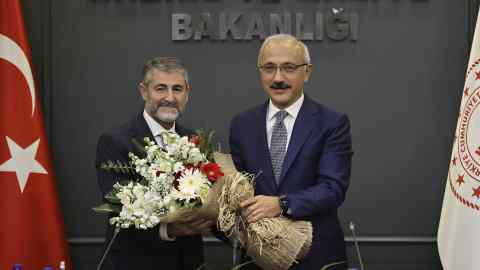 Erdogan’s fitness at low rates has caused tension with his finance minister, Lutfi Elvan, who was the last remaining voice of economic orthodoxy in his cabinet. The Turkish president on Thursday accepted Elvan’s resignation and replaced him with a loyalist who praised his economic approach.

Shortly after Elvan’s departure, the central bank announced that it would return to the controversial policy of using its foreign exchange reserves to support the lira, which this week reached a new record low of 14 against the dollar.

The central bank spent an estimated $ 1 billion on the first intervention, according to Goldman Sachs. On Friday, he announced that he would sell foreign currency for the second time in three days.

The rating agency Fitch downgraded its outlook on Turkey from “stable” to “negative” and warned that continued intervention by the central bank “would not in itself address the root causes of the depression pressure”. It said the policy “risks further undermining the composition of the already weak central bank international reserves”.