The British Foreign Secretary will face a parliamentary frenzy on Wednesday, while London and other Western capitals face accusations of Taliban dissatisfaction following the withdrawal of international forces.

The Foreign Affairs Committee will challenge Dominic Raab over his department’s failure to provide the Afghan national forces would surrender or prepare an evacuation strategy earlier.

The committee’s MPs will also question the work of British diplomats and other officials on the ground in Afghanistan since the US announced a withdrawal date 18 months ago.

One member said the Foreign, Commonwealth and Development Office had appeared completely “inappropriate” at the appearance and oversight of the need for an earlier evacuation attempt, and Raab would be challenged as to whether he had mastered the situation.

He is also likely to be reprimanded over revelations in The Times that Foreign Office staff have left documents at the British embassy with the contact details of Afghans working for them.

Prime Minister Boris Johnson received a call to sack Raab in recent weeks and the Secretary of State are accused of complacency after it emerged that he had delegated urgent calls on the deployment crisis to junior ministers in the department he was on holiday in Greece.

Neil Coyle, an MP in the committee, said Raab “should explain why thousands of British citizens and allies were left behind despite 18 months’ warning that they must leave”.

‘He should also explain why the UK looks so isolated, while the US does not inform our government of its decision to abandon Bagram [air base] and refuses to extend the deadline for evacuation of the airport in Kabul. ”

Raab on Tuesday began blaming his own department and pointed to inadequate military and US intelligence because he could not predict that the country would fall to the Taliban so quickly.

“The assessment was clearly wrong,” he told BBC Radio 4s Today program. “That is definitely not the main responsibility of the Foreign Office.”

He added that 5,000 British nationals were among the 17,000 people who had helped the UK leave the country since April.

MPs in the foreign affairs committee said Raab had promised to appear for only an hour, adding that this was only the beginning of their investigation into the government’s greater failure to anticipate the crisis. 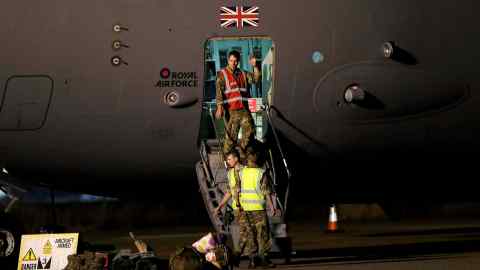 They said a full investigation should be conducted, which includes taking evidence from the secretaries of foreign affairs, home affairs and defense, as well as former prime ministers.

Chris Bryant, a senior Labor MP on the committee, said there were questions about why the UK was lagging behind in the European External Action Service, the EU’s diplomatic service, over attempts at repatriation for those still out of the country. wants to escape.

“The European External Action Service has already prepared people in all the neighboring embassies to lead resettlement schemes, and we have not,” he said.

‘The bigger point is how did we end up in this awful mess? Why were we so blinded when we were most exposed? ”

Many MPs have said they are helping people leave the country, and Raab will face questions about the preparations being made for the evacuation of suitable Afghans and British nationals living in the country.

Labor MPs have claimed to be handling thousands of cases of those eligible to leave. Raab insisted on Tuesday that the number of British nationals still in Afghanistan was in the “low hundreds”.

Downing Street said on Tuesday it would increase the number of civil servants in the countries bordering Afghanistan. “This is something we are arranging, these training staff,” a spokesman said.

Number 10 also said that Johnson had maintained full confidence in Raab and that media speculation that the foreign minister would be ‘toast’ in any impending reform was dismissed.