From what looked like a basement in the besieged port city of Mariupol, a deputy commander of the nationalist Azov Regiment, a part of Ukraine’s National Guard that Russia has described as “neo-Nazi”, wanted to make something clear.

“You have to understand what Azov is. These are the men who, for the most part, took arms because we were attacked by Russians, ”said the stocky bearded fighter, identifying himself only by his war name Kalyna, in a post on the Azov Regiment’s Telegram channel. “I ask you not to confuse the concepts of patriotism and Nazism,” he added.

The infantry unit was created in 2014 by volunteers with nationalist and often far-right political leanings to fight separatists in eastern Ukraine. But, as Russia’s invasion enters its second month, the regiment has been key to the nationwide resistance effort, with prominent roles in key battles in Kyiv, Kharkiv and, mainly, Mariupol.

Andriy Biletsky, a founding commander of the Azov forces and a former MP under its splinter political wing, the National Corps, told the Financial Times by telephone from Kyiv that “they are the spine of Mariupol’s defenses”, adding that there were about 1,500 Azov fighters in the city. “We are leading in the most serious battles,” he said.

Having started as a militia of just over 300 troops fighting Moscow-backed separatists, now “there are scores of thousands” of Azov fighters, said Biletsky. He added that most were serving within Ukraine’s territorial defense units, including more than 1,000 in Kharkiv. The interior ministry would not comment on the estimated size of Azov’s forces.

Azov’s history is rooted in a volunteer battalion formed by the leadership of a neo-Nazi group. But it is certain that Azov depoliticized itself. Its history linked to the far-right movement is pretty irrelevant today, ”said Anton Shekhovtsov, a Vienna-based Ukrainian expert on Russia’s connections to Europe’s far-right.

Most Azov fighters “are patriotic, many of them are nationalists. But the majority of Ukrainians today are nationalists, ”said Biletsky. He claimed that many Ukrainians now looked up to “heroes” like Stepan Bandera, a nationalist leader who opposed both Nazi and Soviet efforts to prevent Ukraine’s independence.

Azov fighters count Israelis, Azeris, Georgians and even Russians in their ranks, according to Biletsky. They post videos of themselves attacking the enemy – blowing up Russian tanks or bundling tied-up and half-undressed Russian soldiers into a truck.

Its members and supporters shrug off the neo-Nazi label as “Russian propaganda”, especially after the repeated insistence of Vladimir Putin, Russia’s president, that he invaded Ukraine to “de-Nazify” the country.

“If we look at the actions of Russia, for example destruction on ethnic grounds of cities for being Ukrainian, it seems this more closely resembles the label of Nazism,” said Biletsky.

President Volodymyr Zelensky – who is Jewish and this month awarded the title of Hero of Ukraine to an Azov commander – on Monday said that in attempted peace talks Ukraine refused to discuss Russia’s wish for “denazification” and “demilitarization”, which he called “completely incomprehensible things”.

“The way that Putin and the Kremlin use the terms ‘Nazism’ and ‘fascism’ is rooted in the Soviet era when, then and now, it means anybody who does not want to be either part of the Soviet Union or part of the Russian world, ”said Taras Kuzio, a British-Ukrainian research fellow at the Henry Jackson Society, a think-tank.

Sergei Lavrov, Putin’s foreign minister, accused Azov troops at a shelled maternity hospital in Mariupol of “turning people into human shields. . . placing their attack equipment there and opening fire on the positions of Russian troops ”. Ukrainian and US officials denied those claims.

“They are under constant fire from Russian propaganda because Russians do not like the idea of ​​a Ukrainian nation, they see that as a threat,” said Alex Kovzhun, a Kyiv-based consultant who helped develop the program of Azov’s political wing. He said the National Corps’ ideology was akin to a “European rightwing conservative party, but it is definitely not ultra-right”.

He explained that Azov was formed of historians, football hooligans and men with military experience, some sporting “dubious tattoos” – including the Black Sun and the Wolfsangel used by the Nazis but now claimed as pagan symbols by some battalion members.

They first fought alongside a Ukrainian army which had been weakened by the pro-Kremlin presidency of Viktor Yanukovych and were incorporated into the national guard after they helped retake Mariupol in fierce battles in 2014.

“From the beginning I saw the unit as a part of Ukraine’s armed forces,” said Biletsky, who left Azov to run for parliament as elected officials can not be in the armed forces.

In 2016, the UN documented that members of Azov embedded their troopers and weapons in civilian buildings in the Donbas region. Two years later, the US state department labeled the National Corps a “nationalist hate group” and linked it to a group that “attacked” an ethnic-Roma camp in Kyiv.

The political leanings of some Azov members have never been popular with most Ukrainians. The National Corps was part of a bloc with other far-right parties that received just over 2 per cent of the vote in parliamentary elections in 2019. 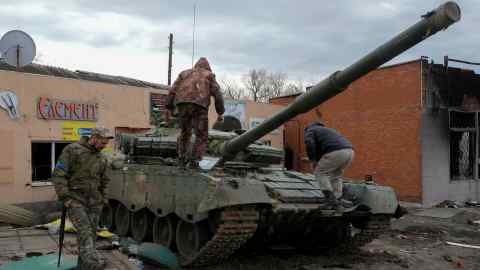 But liberal Ukrainians fear that the regiment may stand to benefit politically from its battlefield prowess. “Are these the kind of fascists we want to run our country after this war is over?” asked a linguist in Kyiv.

For now the political program is taking a back seat. “Azov does not follow any political ambitions or goals during the war,” said Oleksandr Alfyorov, a historian and former spokesperson for Azov. The National Corps, he explained, had also “suspended political activities” because all active members had “now taken up arms or become volunteers”.

With Azov fighters vital to the war effort, its volunteers feel they are earning the support of Ukrainians who are more concerned about defending the country than political affiliations.

“Interest in our movement increased even before Russia’s open aggression,” said Serhiy Bevz, an Azov combatant in Kyiv, citing the regiment’s training of civilians in preparation for the conflict. “We are ready to defend our state from the occupiers with all our might.”

In his Telegram post Kalyna, the deputy commander, said: “Patriotism is when you defend your country and do not attack others.” Slamming Russian warmongers, he added: “We have never tried to seize foreign lands but we have to confront the real Nazis of the 21st century. Slava Ukraini! [‘glory to Ukraine!]. ”