Drive to Survive — Netflix’s F1 thrill ride returns but is it good for the sport?

You may, as I did, want to turn straight to the final episodes of Formula 1: Drive to Survive, the Netflix series, now in its fourth season, that looks behind the pit walls of F1. Even by the overwrought standards of this spectacular sport, last year’s season was, as they say, next level.

The contest in Abu Dhabi, which concluded the 2021 season in December, was set up to be a thriller: the two leading contenders, Mercedes’s Lewis Hamilton and Red Bull’s Max Verstappen, equal on points, the former seeking a record-breaking eighth championship, the young pretender looking for his first. The clear winner, says F1 president and CEO Stefano Domenicali, smiling at the cameras before the race, “will be Formula 1”. He was both right – and wrong.

The race’s climax became a bizarre one-lap shootout that handed the trophy to Verstappen and kept the world talking for weeks. Few observers, however, found the conclusion obviously fair, appropriate or even understandable. Formula 1’s finest moment threatened to become its most ignoble, as lawyers dived into the controversy.

Some of the exchanges around the race have already become part of F1 history, and it is satisfying to see them played out in something approaching real time here. “What just happened?” demands bewildered Mercedes boss Toto Wolff or race director Michael Masi. “It’s called a motor race, OK?” replies Masi bluntly.

Despite appeals, the result stood. In an earlier episode, Masi describes his role as that of “race director, safety delegate, friend and umpire”, which seems about three jobs too many – and so it proved. He has since been removed from his position as part of a restructuring exercise.

Widespread among the criticisms of Netflix’s series, which is, make no mistake, assembled and edited with rare brilliance, is that it has itself had an undue influence on events on the track. The final moments of Abu Dhabi, according to those critics, were the contrived result of the pressure for unnecessarily heightened drama. In the race’s aftermath, even the British driver Lando Norris conceded that the finish had been “for the TV, of course”. 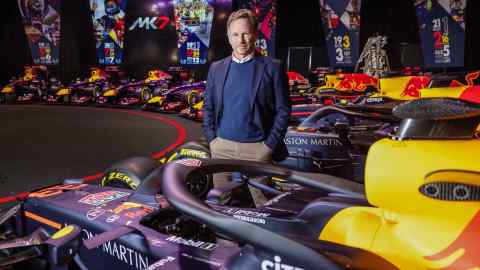 The show’s producers have rightly ridiculed the idea that Masi might have been influenced, in those tense seconds, by the presence of the Netflix cameras. But reality TV has taught us that these interplays work more insidiously than that. One of Drive to Survive‘s strengths has been to delve more closely into the characters of a sport whose aficionados can happily talk for two consecutive hours on tire treads. There can be little doubt that it has substantially broadened F1’s appeal.

Those characters, in turn, are beginning to understand the show’s requirements, and have learned to play to the gallery. The result is often cartoon-like: Wolff is portrayed as (or portrays himself as) urbane, reflective, mindful of the sport’s decorum; Red Bull principal Christian Horner is the disrupter, sharper in tone, and endlessly aggressive: “We’ll get the fuckers,” he says, on more than one occasion, of his determination to end Mercedes’ dominance. Wolff says it is like being snapped at by a Jack Russell terrier.

As for the true protagonists, Verstappen and Hamilton, remarkable drivers both, they understand the need to tread lightly on the throttle of this particular juggernaut. The Dutchman sees no need to talk directly to the Netflix cameras at all; Hamilton’s self-possession is a beautifully played exercise in showbiz Zen. Asked about his motivation, he movingly recalls his schooldays, when, as the only black boy in the playground, he was always last to be picked for football teams. It’s a rare insight.

In the final scene of the final episode, Wolff, dressed in a funereally-dark polo neck, is asked if there is now a target on the back of the Red Bull drivers. His response is the kind of thing Aeschylus might have teased the audience with after the first part of the Oresteian trilogy. “Everybody has a target on their backs next year.” Long pause, fade to black.

Activities resume in Bahrain on Friday.