Join myFT Daily Digest to be the first to know about Coronavirus pandemic news.

Restrictions for international travelers entering England were facilitated by the simplification of the ‘traffic light system’ and the abolition of pre-departure tests for those who had two Covid jabs.

Transport Secretary Grant Shapps said travelers fully vaccinated against coronavirus could replace the current PCR test, which is on the second day after their arrival in England, from the end of October with a cheaper lateral flow test.

The cost of paying for tests has been a deterrent for some people in England who want to travel abroad, as well as for ‘incoming’ trips to the country. PCR tests cost around £ 70, while lateral flow tests can be as good as £ 25.

Shapps also said the government claimed its “amber list” from Oct. 4, leaving only two travel categories: a red list of countries not allowed to go and a green list of those considered relatively safe.

Eight countries will be removed from the red list from 4 September to 22 September: Turkey, Pakistan, the Maldives, Egypt, Sri Lanka, Oman, Kenya and Bangladesh.

The changes do not apply to people flying their own rules and restrictions to Wales, Scotland or Northern Ireland.

People who have not yet been double-vaccinated still have to be separated from non-red list countries for 10 days on arrival in England for 10 days and take three tests, one before departure and PCR tests on days two and eight after their arrival.

Thomas Cook, the online travel agent, said he expects the best weekend for bookings this year after the announcement.

Alan French, CEO of Thomas Cook, said bookings for overseas breaks during the half-school term in October are twice as many as holidays in August. “We also expect a flood of interest in two- and three-night urban holidays,” he said.

The removal of Turkey, a popular late-summer destination, from the red list was also welcomed by travel industry executives who blamed the government’s traffic light system and stringent testing requirements for a gloomy holiday season.

“This is an important and welcome step towards recovery,” said Stewart Wingate, Gatwick’s CEO, about the changes.

Many in the sector have called on the government to go further and abolish more restrictions.

“We call on ministers to review this policy and eliminate all tests for fully vaccinated travelers as soon as possible in the future, in line with most other European countries,” said British Airways CEO Sean Doyle. 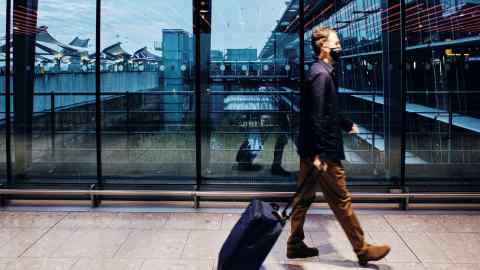 Shares in major UK airlines rose this week with the expectation that the rules would be eased. British Airways’ owner, IAG, rose 5% on Friday, easyJet gained 4% and Jet2 owner Dart Group added 5.5%.

The government’s approach to international travel has changed repeatedly since the start of the pandemic 18 months ago, reflecting the balance between protecting public health and supporting the economy. Shapps describes the new system as a “proportionately updated structure” that reflects the fact that 44 million people in the UK have now been vaccinated.

“Today’s changes mean a simpler, simpler system,” he said. “One with fewer tests and lower costs, allowing more people to travel, see loved ones or do business around the world, while boosting the travel industry.”

At the same time, England will expand the list of countries from which it recognizes vaccination to the success of a pilot study with the US and Europe. Another 17 countries and territories will be added to the list, including Japan and Singapore.

More than 50 countries – including Mexico, South Africa and Thailand – remain on the red list.