Everton Football Club is in talks to secure new funding after suspending sponsorships with companies connected to sanctioned Russian billionaire Alisher Usmanov, according to people with knowledge of the matter.

The move comes as Everton and Farhad Moshiri, the Premier League club’s British-Iranian majority shareholder, wrestle with poor performance on the pitch and the impact of sanctions on its business.

Options being explored by the Liverpool club include raising equity, according to two people with knowledge of the discussions. Another person said Everton has held talks on raising debt.

But two people close to Moshiri and the club said the only funding being sought was for Everton’s new £ 500mn waterfront stadium, talks over which preceded the unwinding of links to Usmanov. A separate person with knowledge of the stadium confirmed the club was also exploring funding for the project.

Vladimir Putin’s war against Ukraine has exposed the reliance of Everton and London rival Chelsea, which is owned by Russian-Israeli billionaire Roman Abramovich, on wealthy Russians accused of being close to the Kremlin and now subject to sanctions. It has also raised deeper questions about the ownership of Premier League clubs.

Everton has cut ties to USM Holdings and other companies connected to or owned by Usmanov, an Uzbekistan-born Russian billionaire who has been sanctioned by the EU, UK and US. Moshiri is no longer named on USM’s website, having previously been identified as chair and a shareholder. 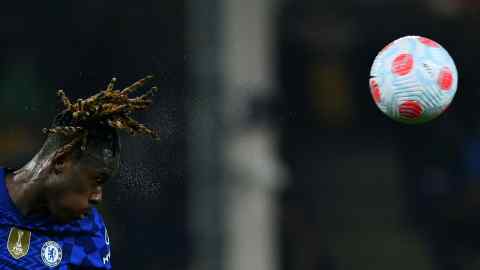 As well as multimillion-pound sponsorships, USM in 2020 acquired an option for the naming rights to Everton’s planned Bramley-Moore Dock stadiumin a deal worth £ 30mn to the club.

Moshiri, who owns more than 94 per cent of the Premier League side’s equity, took a majority stake in Everton in 2018, having first invested in the club two years earlier. He previously invested in London rival Arsenal alongside Usmanov. Stan Kroenke, the US sports mogul, now owns Arsenal.

In the 2019-20 season, Moshiri injected nearly £ 50mn of interest-free loans into Everton, according to its accounts, taking the outstanding total to £ 348mn at the end of that period. In January this year, Moshiri converted a £ 100mn loan to the club into equity.

Everton’s latest annual accounts are due to be published by the end of the month and cover the period during which clubs were forced to hold matches in empty stadiums because of the pandemic, in effect wiping out ticket revenue.

The club is facing a further potential hit to its finances from relegation. Everton sits in 17th place out of 20 clubs in the league table, putting the team at risk of being demoted to the Championship, the second-tier of English football.

Four people with knowledge of the financing discussions warned that relegation was a major concern for potential investors, given the club would no longer share in the more than £ 10bn of broadcast revenue generated by the Premier League.

One senior executive at a top-flight rival said Everton’s current leadership would “struggle” to convince investors that they are “the right people” to lead the club.

Scoreboard is the Financial Times’ must-read weekly briefing on the business of sport, where you’ll find the best analysis of financial issues affecting clubs, franchises, owners, investors and media groups across the global industry. Sign up here.