Boris Johnson is unlikely to have been acquitted of violating ethical rules regarding the refurbishment of his Downing Street apartment if investigators were fully aware of his exchange with a Tory donor.

The British Prime Minister offered a “humble and sincere apology” to Lord Christopher Geidt, Whitehall’s independent adviser on ministerial interests, after admitting that he had failed to share WhatsApp messages with conservative party donor Lord David Brownlow during a initial investigation last year.

In a series of three letters Geidt, who was published by the Cabinet Office on Thursday, investigating Johnson over a £ 58,000 donation by Brownlow to renovate the apartment at 11 Downing Street, expressed his displeasure that not all information was initially made available to him.

The existence of the previously unknown messages between Johnson and Brownlow was revealed through an investigation into the donation by the Electoral Commission, after which Geidt reconsidered his initial investigation.

In a letter dated December 17, 2021, Geidt said that if he had known of the contacts, “I doubt whether I came to the conclusion without qualification” that Johnson had taken the relevant steps to make the statement public. But the British prime minister was nevertheless acquitted of violating the ministerial code.

Johnson apologized for the failure to disclose all relevant communications. “I am sorry that the Office of the Independent Adviser has been placed in this position and can only repeat the humble and sincere apology I gave when we discussed this matter earlier today,” he wrote on December 21.

Geidt said it was “very unfortunate” that Downing Street no longer took care to ensure that he received all the necessary information about the donation. “It is clearly unsatisfactory that my earlier advice could not have relied on the fullest possible disclosure of relevant information,” he wrote.

Johnson said he did not have full access to WhatsApp messages sent to Brownlow on a cell phone that was changed in April 2021, after it was revealed that the prime minister’s number had been in the public domain for 15 years.

“You appreciate the security issues faced at the time, meaning I did not have access to my previous device and did not recall the message exchange,” he said.

Geidt acknowledged that the process “shook my confidence in the oversight system” because “potential and actual failures of the process occurred in more than one part of the government apparatus”.

The Geidt investigation was criticized for not being thorough. Tim Durrant, a senior researcher at the Institute of Government Thinking, described it as “all failures”.

“Geidt should have demanded more information the first time, officials should have been more proactive in keeping him informed and looking at old phones, and the prime minister should have remembered that he had sent messages to Brownlow months earlier,” he said. said. 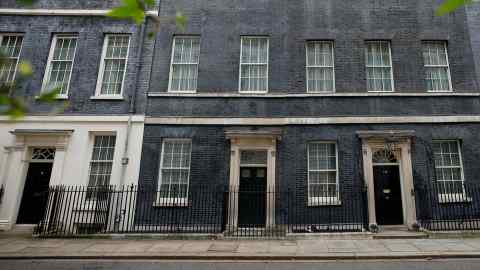 In a message to Brownlow, in which Johnson described his official residence as “a bit of a hint”, the prime minister also discussed plans for a “big exhibition”, which according to a government official would be based on the Great Exhibition of 1851, which showed with ware of the British Empire at Crystal Palace.

On January 18, 2021, a few weeks after the messages were sent, Brownlow met with Culture Secretary Oliver Dowden at the Royal Albert Hall “to discuss plans for Grand Exhibition 2.0”, according to the register of ministerial meetings.

Downing Street said the idea for another Large Exhibition “was not taken forward”. Those with knowledge of the situation said the event was Brownlow’s private proposal and not related to the ‘Unboxed’ festival of the UK, which would take place later this year.

Johnson and Geidt both agreed in the letters that more resources should be allocated to the secretariat overseeing ministerial interests and said his competence would be reconsidered. One senior Whitehall official described the investigation as “a total dog meal”.