Generali, Europe’s third-largest insurer, is discussing shutting down its operations in Russia and quitting the board of its joint venture in the country, joining a growing list of multinational companies that are leaving the market in protest at the invasion of Ukraine.

The Milan-based insurer intends to wind down its Europ Assistance operation in Russia, an insurance services company, which has about 80 staff, and to freeze its almost 40 per cent stake in insurer Ingosstrakh, which counts Russian oligarch Oleg Deripaska as a shareholder, according to three people with knowledge of the discussions.

Generali did not plan to try to sell its stake in the joint venture in the short term, but the three Italian members of the board – which include former Eni chief Paolo Scaroni – planned to resign, they added.

In January, Generali’s chair Gabriele Galateri di Genola was one of several Italian executives who joined a video conference with Russian President Vladimir Putin to discuss the future of Italo-Russian business ties.

A growing number of foreign groups have announced they will close down their operations in Russia in recent days as the conflict in Ukraine has worsened and sanctions from western governments have multiplied.

Huge consumer brands such as H&M and Nike are suspending sales, while Volkswagen joined fellow German carmakers BMW and Mercedes in suspending all local production in Russia.

In the energy sector, Shell and Eni have said they will exit their joint ventures with Russian state producer Gazprom. ExxonMobil has said it will stop investing in the country and quit operations at a large oil and gas project. 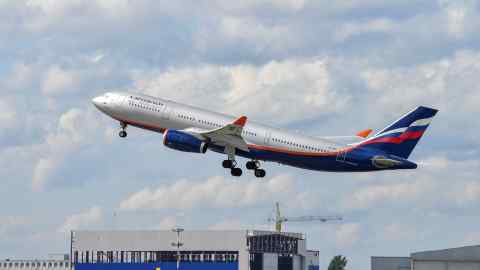 But as Generali is set to act, other big European insurers have taken a more cautious view. France’s Axa told the Financial Times at the start of the invasion that it was “committed, with our joint venture partners there, to continue and even go through that difficult phase”. Asked again on Tuesday, the company declined to comment further.

Allianz, Europe’s biggest insurer, which offers a wide range of insurance products in Russia, has made no indication that it is considering exiting the market. “When we enter a market we take a long-term, even generational, view,” the company said on Wednesday, adding that it was ready to comply with sanctions and regulations.

According to people close to Generali, the insurer has been trying to sell its stake in Ingosstrakh since 2018, which the insurer had only taken as part of a 2013 deal to terminate its partnership with PPF Group, controlled by Czech businessman Petr Kellner.

Under that arrangement, which formed part of Generali’s broader expansion plan in eastern Europe, Generali took over PPF’s stake in Ingosstrakh.