Lee, a 64-year-old former security minister, resigned from his post as the top civil servant on Wednesday and is believed to have Beijing’s backing, according to people familiar with the process.

The former police officer would be the first chief executive with a security background since the city’s handover from the UK to China in 1997 and has played a significant role in a crackdown on opposition following Beijing’s imposition of a sweeping national security law in 2020.

“He is the only candidate,” Michael Tien, a pro-Beijing politician who sits on the election committee which selects the new leader, told the Financial Times.

Membership is restricted to about 1,500 “patriots only” Beijing loyalists, who are expected to cast their votes on May 8.

Lee has previously said that the Chinese government’s counter-terrorism measures policies in Xinjiang, where Beijing has interned 1mn Muslim minorities, were “worth studying”.

But critics have pointed out that he lacks experience handling financial and economic affairs in a city whose reputation as an international business hub has been battered by the security law and some of the most restrictive Covid-19 policies in the world.

“Many people have raised the fact but as a leader, he will surely have a team to work with him,” said one senior business executive.

Lam, who announced on Monday that she would not seek a second term, oversaw the government’s disastrous handling of an Omicron outbreak that led to the city’s death rate rise to the highest in the world in March. 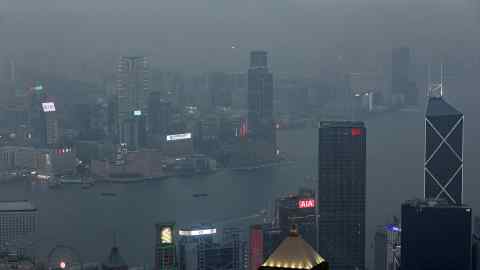 Hong Kong has been virtually sealed off from the rest of the world as officials followed Beijing’s zero-Covid strategy. That isolation, plus mixed messaging on whether the city would go into lockdown and positive cases would be forced into compulsory government quarantine, sparked an exodus of residents.

A number of cases where children with Covid were separated from their parents in hospitals further spooked the city’s international community.

“Having been in government for over 40 years, to serve the people of Hong Kong, is a glory,” Lee said.

Paul Chan, the city’s financial secretary who was seen as an alternative candidate, said: “I wish [Lee] every success. ”