Then save a moment for Boohoo and Asos. Because a reversal of fortune in retail is running both sides.

At M & S, profits are heading in the right direction after a dismal five years, as much as 10 times higher than last year if the retailer’s upgraded forecasts are true. At Asos and Bohoo they are not. Asos had a good year of pandemic trading, but said it expects profits in its new financial year to drop by at least a quarter. At Boohoo, margins are shrinking and capital spending is rising. Missguided is said seek additional funding after a difficult few years.

Stock price performance for the year so far shows a feather that trumps fast fashion. M&S has risen nearly 70 percent since the dawn of 2021. Asos and Boohoo have each lost more than 40 percent. M&S has once again surpassed both online retailers in terms of market capitalization.

Does this reflect a structural shift away from online fast fashion in favor of a legacy?

Unlikely. Asos set out on Wednesday details of its plan to increase sales to £ 7 billion over the next three to four years. Last month, it reported its highest annual profit to date, of £ 177 million. Boohoo’s sales should be more than £ 2 billion this year and it has grown at a rate of more than 20 percent.

In clothing and home, M&S had pre-pandemic sales of £ 3.2 billion and it shrank. Fast 18 months ahead and they are still shrinking, half-yearly figures showed on Wednesday. A significant part of M & S’s performance is due to food. It has faltered before, but M&S ​​has done a good job of fixing it and it is showing solid growth.

What the discrepancy does show is the declining advantage of online retailers from the noughties era, and the progress that heritage operators like M&S have made to catch up.

In a sense, M&S and High Street rival Next do not follow such different strategies as Asos and Boohoo.

Everyone wants to be some kind of multi-brand platforms. Everyone bought interests in other brands. M&S has Jaeger. Next, Victoria’s Secret. Asos, Topshop. Boohoo a whole menace of high street failures. For both Next and Asos, executing partners’ orders is a key component of potential growth. The “test and repeat” strategies of fast fashion are now the norm. At M&S, it seems to be bearing fruit to win product lines, improve availability and staff.

But both M&S and Next are adamant that physical stores also have a place in the future. M & S’s target is that 40 per cent of UK non-food sales will be online within three years. This leaves a lot of room for real estate.

M&S may still find itself with too many stores and an account for closures exceeding the £ 943m it already estimates. Almost everything has gone M & S’s path since it first upgraded profit forecasts in August. It may not continue. 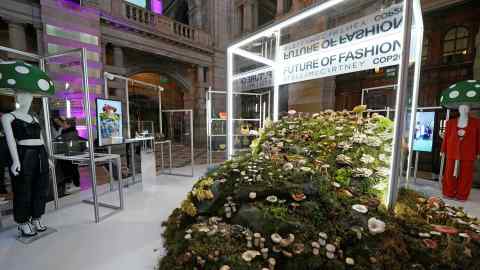 But after surviving the past few years of turmoil, the pressure on the main street seems to be easing just as it is increasing online. M&S benefited from the departure of Debenhams and Arcadia. Next’s rental bill has dropped significantly. Meanwhile, Asos and Boohoo face potentially tougher competition, just as they need to increase investment to support expansion.

Boohoo is 15 years old, Asos 21. They run the risk of becoming the aging backlog compared to Shein, a Chinese e-commerce company that barely existed eight or nine years ago. Shein could already be the largest clothing retailer in the world next year, analysts at Morgan Stanley reckon. The prices for Gen Z-focused fashion are cheaper than anywhere else, apart from Primark and the delivery times for its fastest products in as little as a week. This may be a bigger threat to Boohoo than Asos (which has an older customer base), but makes expansion for either more challenging.

M&S investors are used to false dawn. At the very least, they can take comfort in the fact that the company is not the only retailer navigating challenges. And as Norman says, those gains are really “quite nice”.

City Bulletin is a daily information session from City of London that is delivered directly to your inbox as the market opens. Click here to receive it five days a week.