How Hermès watches ticked up as rivals lagged behind

In its most recent annual report, published in February, French luxury house Hermès announced that 2021 revenues had risen 42 per cent, year on year, to almost € 9bn. But while the group recorded high double-digit growth across all sectors as it bounced back from the pandemic, one category stood out: watches.

According to the report, Hermès Horloger’s revenues were up 72.5 per cent on 2020, reaching € 337mn. This put the Swiss watchmaking division way ahead of the industry average – figures from the independent Federation of the Swiss Watch Industry (FHS) showed overall exports of Swiss watches increased 31.2 per cent by value last year, taking total revenues to a record SFr22.3bn ($ 23.6bn).

This is not the first time Hermès’ watch division has bucked industry trends. Factory and store closures caused by the pandemic wiped almost SFr5bn off Swiss watch exports in 2020, according to the FHS, a decline of 21.8 per cent over the previous year. Hermès’ watch revenues, however, rose about 2 per cent year on year in 2020, adding up to a 77 per cent rise over two years, compared with 2.7 per cent for the Swiss watch industry as a whole.

How? It is a long-term vision that is paying off, claims Hermès. “Our strategy for the last 15 years or so has been based on the idea that we want to be perceived as a real Swiss watchmaker and a true actor in the mechanical part of the business,” explains Guillaume de Seynes, president of Hermès Horloger and a sixth-generation Hermès family member.

A focus on Hermès’ creativity has been important, too, says de Seynes. Playful high-end mechanical pieces, such as Arceau Le Temps Suspendu and Arceau L’Heure De La Lune, both prize winners at the prestigious Grand Prix d’Horlogerie de Genève watch industry awards, have helped elevate perceptions of the brand – and its revenues .

The watch division also benefited from decisions taken during the first wave of the pandemic: postponing new launches so as not to overstock retailers; ending its reliance on duty-free sales; and focusing on its localized retail network.

De Seynes says Hermès’s boutiques have to represent every Hermès product category, but that they can dictate inventories to suit local tastes. As a result, he says, Hermès Horloger was one of only a handful of watch companies to advance in a year of lockdowns.

Industry experts have been quick to highlight the company’s performance. “Hermès has done an outstanding job of realizing its watch collection with the rest of the brand, which is the epitome of luxury,” says Oliver Müller, founder of Swiss luxury consultancy LuxeConsult.

Luca Solca, a luxury analyst at research company Bernstein, says the brand’s perceived quality-to-value ratio has also fueled its success. “Hermès watches look cheap relative to other products – prices in the industry have gone up a lot,” he says. “The idea is to position Hermès primarily in the accessible segment, with products below € 10,000 and many around € 5,000.”

But Solca sounds a note of caution: “Chanel has had even greater success, coming from creating an icon, the J12that I do not find in the Hermès range. ”

We do not pay anybody to wear our products and we do not give anything to anybody. The star is the product

Data from Morgan Stanley and LuxeConsult suggest Hermès is gaining on its competitors. In their 2021 report on the Swiss watch industry, published last month, they calculated that Hermès’ results made it Switzerland’s 19th-largest watch producer by revenue, up seven places on 2019.

Hermès, because it controls large parts of its supply chain, was well placed when the industry ran into manufacturing problems caused by the pandemic. In 2006, guided by the Seynes, it had taken a 25 percent stake in movement maker Vaucher, before purchasing specialist dial and case makers now operating under the Hermès Horloger banner. Many Swiss watch companies are reliant on third-party manufacturers for parts and have complained of supply chain issues during the pandemic.

While FHS statistics showed industry export revenues were up last year, volumes were down by 4.9mn units on 2019, a fall of almost 24 per cent, caused in part by shortages.

One of the new Hermès releases delayed because of the pandemic was H08, an original watch design de Seynes describes as being “dedicated to men”. In contrast to most established watch brands, 80 per cent of Hermès watches are purchased by women. The design of H08 was overseen by the division’s creative director, Philippe Delhotal, and has proved popular with buyers.

“It was a sellout success,” says Chris Hall, senior watch editor at the Richemont-owned online style portal Mr Porter. “It’s so hard to launch into this segment with a completely new design that has such a distinct personality. H08 is sporty and luxurious at the same time. ”

Despite its recent successes, Hermès Horloger remains a “challenger brand”, says de Seynes. He says its future growth will come from “activities that are more industrial and less artisanal, such as jewelery, shoes and watches”. 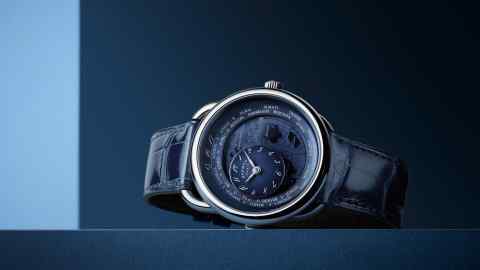 But he has no plans to use influencers. “We do not pay anybody to wear our products and we do not give anything to anybody,” he says. “Grace Kelly was a customer. So, too, Jane Birkin. The star is the product, not anybody that is interested in the brand. ”

During the pandemic, the currency of hard luxury has increased. But, for de Seynes, the reasons for Hermès Horloger’s growth are more fundamental: “We bring something French, or maybe Parisian, with strong creativity – and more freedom.”