Labor calls for an inquiry into Sir Geoffrey Cox, former attorney general, after footage apparently shows the MP using his House of Commons office for his legal work to advise the British Virgin Islands.

The British opposition party is appealing to the Independent Standards Commissioner to determine whether the use of Cox’s parliamentary office is in breach of the MP’s code of conduct, which stipulates that any facilities paid by the taxpayer are only an MP’s “parliamentary duties” “support.

Video footage from September appears to show how Cox is participating in a virtual session of the BVI commission of inquiry from his parliamentary office.

The code of conduct is clear that an MP’s use of public resources should not “confer any undue personal or financial benefit on themselves”.

Cox earned nearly £ 1m from his legal career last year, in addition to his £ 82,000 salary as MP for Torridge and West Devon.

Angela Rayner, deputy leader of Labor, said: “A Conservative MP who uses a taxpayer-funded office in parliament to work for a tax haven facing allegations of corruption is a slap in the face and an insult to British taxpayers.

“The prime minister must explain why he has an MP in his parliamentary party who treats parliament as a space for co-operation that allows him to continue with all his other works instead of representing his constituents.”

Cox has so far not commented on the issue and has been contacted for an answer.

Kathryn Stone, the parliamentary standards commissioner, concluded last month that former minister Owen Paterson had broken the rules when he used his parliamentary office to hold meetings with two companies for which he was a paid consultant.

According to Stone, Paterson held meetings with medical diagnostic company Randox and meat processor Lynn’s Country Foods on 25 occasions between October 2016 and February 2020. 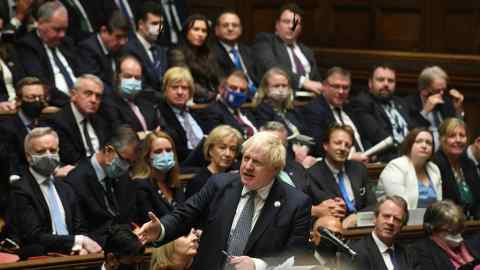 Johnson’s spokesman on Tuesday addressed a thinly veiled reprimand to Cox, saying: “MPs’ primary task is and should be to serve their constituents and represent their interests in parliament.

“They must be visible in their constituencies. If they do not do that, they will not do their job, and will be rightly judged by their constituents. ” No. 10 did not comment on the latest allegation.

The queue comes as Tory MPs fear Johnson’s poor handling of the standard issue has created a hostile environment in which the media will search for stories about the behavior of MPs and peers.

Ministers on Tuesday tabled a motion to scrap a proposed Tory-led committee to rewrite the regime over MPs’ behavior. MPs are expected to endorse the motion, which was tabled by House leader Jacob Rees-Mogg, when they vote on it next week.