Magical jewels with a maharaja in mind

From the window of van Boucheron apartment When I look at the Place Vendôme, I imagine the important day in early August 1928 when HH Maharaja Sir Bhupinder Singh of Patiala made his way across the cobblestone. He was on his way to make the largest special order in the history of Paris Square.

Accompanied by a retinue of 40 servants in pink turban (and the 20 favorite dance girls he also brought to Paris), his company carried six mighty metal chests, filled to the brim with a treasure chest of precious stones. The stock included more than 2,000 carat emeralds, white, yellow and blue diamonds, and an abundance of natural pearls, sapphires and rubies, all wrapped in translucent colored material. They were delivered to Louis Boucheron, son of the founder of the house, Frédéric Boucheron, to use modern interpretations of Indian jewelry, by merging traditional ceremonial ornaments with the prevailing fashionable style of Paris in the 1920s. Boucheron’s designers and workshops took six months to conjure up 149 pieces, including a sumptuous belt, collars, draped necklaces, sautés, bracelets, headdresses, turban ornaments and aigrettes.

The order, as well as the Maharaja’s other commands – including the Patiala chain Cartier in the 1920s – became a legend. And this is a story retold by Boucheron’s high-end jewelry collection, The New Maharajahs. Creative Director Claire Choisne used the original painted gouache designs for these masterpieces and used them to illustrate the creative exchange between India and Europe that shaped art deco jewelry design.

The Maharaja’s stock included more than 2,000 carats of emeralds and diamonds

Choisne says she felt the time was right to reimagine the Maharaja’s inimitable and well-known extravagant style, given today’s demand for flowing designs and the fact that men are increasingly buying and wearing high-end jewelry. “This is a story I’ve had in mind since joining Boucheron [in 2011], but I wanted to give it a modern point of view, ”she says. “I’m not ‘girls’ either, and this story and the archive designs were made for a powerful man.”

Boucheron has shown high jewelry on both men and women over the past three years. “We did not deliberately design jewelry for men,” explains Choisne. “While the original designs in The New Maharajahs were made primarily to be worn by a man, I wanted to reverse the concept, to make jewelry for women that can be borrowed by men.”

The collection is a small but intense version of only 14 gems, organized into sets that can be mixed and matched. Choisne chose a mostly all-white palette of diamonds, rock crystal, pearls and mother-of-pearl, with flashes of emerald to evoke maharaja magnificence. She explains that the monochromatic scheme was a way of contemplating the original designs and simplifying their grandiose, status symbol extravagance.

The New Maharani suite consists of three theatrical necklaces designed – for the brave – to be worn as maximalist layers. First, there is a lace-like diamond choker that washes over the collarbone. Next comes a five-string-draped diamond necklace, reflecting the multi-row pearl and diamond ornaments that typically covered a maharaja’s chest; in the center of each string is a single diamond embedded in rock crystal, which grades in size, while the back is made of twisted gold and diamonds to repeat the side cord that has traditionally fastened the breastplate necklaces. The third necklace is a midriff grazing sautoir with a rectangular, fringe pendant.

The lotus flower is a leitmotif in the collection, often created from mother-of-pearl as a nod to the Mughal passion for carved gemstones. It’s also the central feature of the New Padma suite rings, placed side by side with paved diamonds that lie beneath ointment drops of rock crystal – and are meant to be worn by the fistful.

The narrative is completed by two more Indian-inspired creations. The New Churiyans take the Indian bracelet – worn by women of all ages and circumstances across the country – and reimagine it with streams of diamonds. When not worn, the bracelets are stacked on a mother-of-pearl stand built to look like a sidecar. Finally, the deeply traditional sarpech, or turban decoration, turns into a delicate diamond hairpin, the sharp lines reminiscent of a peacock feather, set with two central rose-cut diamonds. Another echo of the 1920s, with its craving for headdresses. 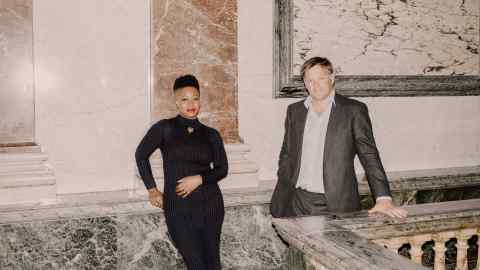 Most importantly, the jewelry is cunningly transformable: the New Maharani sautoir can be taken apart to create a brooch, a shorter necklace or two bracelets; and the lush geometric diamond and emerald pendant in the center of the fringe collar of the New Maharajah set can also be detached and worn as a brooch. All of this brings contemporary zeal and versatility to a historical jewelry legend. The Maharaja of Patiala, who believed that his dynasty was descended from sons of the moon, would surely approve of these heavenly gems for modern maharajas, today’s queens, princes and stylists.