Morale among Russian troops fighting in Ukraine continues to suffer amid growing dissatisfaction across all ranks, the head of the British armed forces said, although that discontent is still far from turning into a substantial revolt.

“We are, unsurprisingly, seeing disquiet at all levels within Russia’s armed forces,” said Admiral Tony Radakin, chief of defense staff, the UK’s most senior military officer. “You’ve seen it at the most junior level. . . We are also seeing the pressure that exists with their tactical and operational commanders. . . and then you get up to their most senior commanders who are clearly under pressure too. ”

Reports of a brigade commander being run over by his own troops, widespread videos posted on social media of grumbling Russian soldiers, and the firing of 12 national guardsmen who refused to fight in Ukraine have fed speculation that parts of the Russian army may be close to mutiny .

But Radakin cautioned that “mutiny” was a strong word – “the naval officer in me twitches when I hear the word” – and added that “we are going to have to wait and see” whether the widely reported discontent inside the Russian army evolves into something more impactful ”.

Even so, Radakin’s remarks – made at a seminar about the future of the British army – add to an overall picture of the growing pressures facing Russia’s armed forces, both within its ranks and between senior commanders and President Vladimir Putin.

British spy chief Jeremy Fleming, head of signals intelligence agency GCHQ, earlier on Thursday said Russian soldiers were “refusing to carry out orders, sabotaging their own equipment and even accidentally shooting down their own aircraft”.

Fleming added: “Even though we believe Putin’s advisers are afraid to tell him the truth, what’s going on and the extent of these misjudgments must be crystal clear to the regime.”

Pentagon spokesman John Kirby said the US also believed Putin was not getting the full picture from his advisers about the performance of his troops.

“The fact that he [Putin] may not have all the context, that he may not fully understand the degree to which his forces are failing in Ukraine, that’s a little discomforting, ”Kirby said on Wednesday. 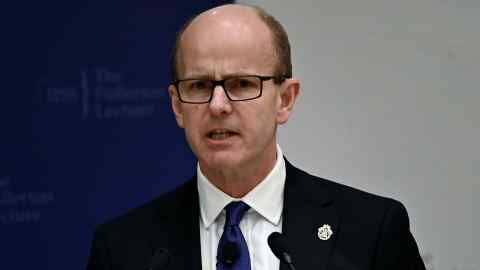 One reason that Putin may not be fully aware of the events on the ground is because a growing blame game between different parts of the Russian military and intelligence services has made it harder for the truth to emerge, western officials said.

“Who is to blame is a question that is happening between agencies and between levels, with everyone blaming other organizations and different levels of command,” one official said.

The official said the Russian military and intelligence services “catastrophically” misjudged the invasion of Ukraine and, even if they did read it right, may not have communicated that properly to Putin.