MPs call for greater transparency on profits from public contracts

Margaret Hodge, chair of the parliamentary committee on tackling corruption, has called for new legislation to force companies that benefit from public contracts to publish accounts acquisition scandals during the pandemic.

Currently, there is no obligation to file profit and loss statements. Hodge said in a letter to the business secretary and head of the National Audit Office that it makes it difficult to determine how much money is being earned to provide essential equipment and services, including personal protective equipment (PBT) during the pandemic.

She said legislative changes could ensure the public gets a fair deal. “In the wake of the large government spending in the pandemic, it will also allow us to see if the inflation of PPE prices is due to genuine competition or unscrupulous profiteering,” she said.

Hodge writes in her capacity as chair of the group of all parliamentary committees on corruption and responsible taxation, a party composed of Andrew Mitchell, Nigel Mills and Rupa Huq.

The call from the Labor MP comes in the wake of a series of scandals in which businesses could win contracts for PVO without competition during the pandemic, and in some cases personal links to government ministers.

Last year, the National Audit Office found that normal standards of transparency in the scramble to secure supplies to deal with the crisis, and that businesses recommended by the offices of parliamentarians, peers and ministers have priority. 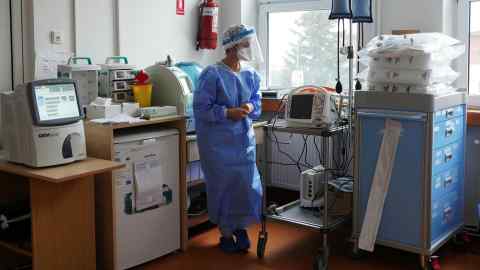 In the letter to Kwasi Kwarteng, business secretary, Hodge said the government was spending £ 15 billion in taxpayers’ money to buy PPE in England during 2020-21 from various suppliers, “often at very high prices”.

She said it was important to assess whether the taxpayer had acquired reasonable value given contracts to supply equipment were handed out quickly during the pandemic – often without competition and to small businesses with limited accounting. Hodge is the former chair of the Public Accounts Committee.

Hodge points to the eexample of Ayanda Capital, a family investment firm that won a £ 252.5 million contract to supply masks to health workers. ‘There is a strong argument for the need for more complete accounting when earning public money in general. However, this is especially the case with Covid contracts – as is the case with Ayanda Capital, “reads the letter.

Hodge wants ministers to amend section 444 of the Companies Act so that all companies that receive public contracts must submit profit and loss statements. Small businesses must already compile these statements, but there is no obligation to submit them.

The letter said: “It is a matter of transparency and value for taxpayers’ money.”