Orange chief to step down after receiving suspended jail sentence

Orange CEO Stéphane Richard will leave the group by the end of January at the latest after being sentenced to a year in prison in a fraud case in France that is not linked to the company.

The lengthy lawsuit, which relates to late businessman Bernard Tapie and Richard’s time in a government post, has long hung over the executive’s tenure at Orange, although he was acquitted of any offense in an earlier ruling.

But Richard, who is also chairman, submitted his resignation at a board meeting on Wednesday, the company said. It will take effect when “the new management structure has been appointed and by 31 January 2022 at the latest”, Orange added.

After a decade in the role, Richard was one of the longest-serving leaders in European telecommunications and is leaving in a time of turmoil and fierce competition within the sector. His term would end in May 2022, and Richard had ambitions to remain chairman, even though he said he would be willing to give up his CEO post by then.

An appeals court in France has acquitted Richard of aiding and abetting fraud, but found him guilty of complicity in the misuse of public funds, linked to a previous post as Christine Lagarde’s chief of staff when she was finance minister. He was also fined € 50,000.

Richard rejected the verdict, saying he would appeal to France’s Supreme Court. “During the process, the charges shifted. . . it is totally incomprehensible and deeply unfair, “he said in a statement.

Orange has two deputy CEOs who will be among the obvious candidates to run for office: Gervais Pellissier, who has been in executive roles at Orange since 2005, and Ramon Fernandez, a former government adviser who is also Orange’s chief financial officer. is.

Richard’s appointment in 2011 coincided with a turbulent period in French telecommunications following the emergence of aggressive competitors such as Altice, which acquired SFR and Numericable, and Xavier Niel’s Iliad. His departure also comes against a backdrop of upheaval for the European telecommunications sector after KKR bid for Telecom Italia this week.

Richard is credited with perpetuating Orange during the early part of his tenure, when the company was recovering from a crisis caused by a spate of staff suicides. 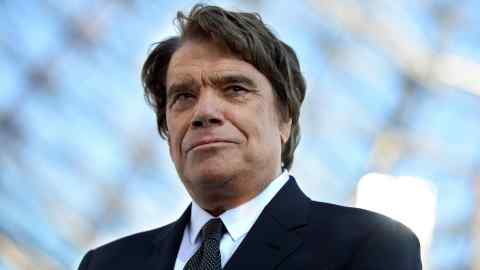 “He brought a sense of calm back to labor relations, which was a real success,” Sébastien Crozier, a representative of the CFE-CGC union sitting on Orange’s board, said before directors met Wednesday.

However, the group has recently struggled in some markets, including Spain, which earlier this year caused a write-down of € 3.7 billion from its business there. Richard also came under pressure in France in June after a network outage that prevented emergency calls for several hours, during which several people died.

The French state has a 23 percent stake in Orange.

The court case refers to a payment of € 403 million granted by the government Peek, a well-known French businessman who was once the chairman of Olympique de Marseille football club and who died in October.

Tapie accused the government of cheating on him when he sold a stake in the sportswear group Adidas to a state-backed bank in 1992.

The state payment, under the supervision of Lagarde, was later criticized as excessive amid accusations that it was a covert reward for Tapie’s support of former president Nicolas Sarkozy during his election campaign.

Lagarde, now head of the European Central Bank, was convicted in 2016 of negligence in public office.