The world’s leading offshore wind developer has called on Joe Biden’s administration to revamp the leasing process for US waters or risk driving up electricity prices and stalling the rise of clean energy.

But David Hardy, chief executive of Orsted Offshore North America, said the auction was a “missed opportunity” for an industry that is still trying to develop local supply chains and manage costs.

“What does that [the $4.4bn] do for the industry, ”Hardy said in an interview with the Financial Times. “It goes into federal coffers. . . Maybe it helps pay for Social Security or helps us defend a country in Europe that needs help. But it does not help offshore wind.

February’s auction in the New York Bight area was the first since Biden entered office with a pledge to increase US offshore wind capacity from virtually nil to 30 gigawatts by 2030 – enough to power about 10mn homes. The government is planning another six offshore wind auctions around the country by 2025, with the next one set for waters off North and South Carolina. 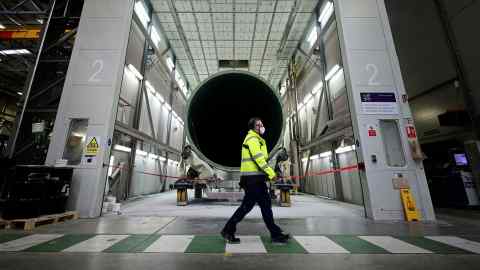 Denmark-based Orsted has already been awarded contracts for capacity of 5GW from seven wind projects on the US Atlantic coast. But Orsted withdrew from last month’s three-day New York Bight auction as prices escalated.

Hardy said his company had studied the leases carefully and was skeptical that the projects could generate adequate returns. Wind developers and their equipment suppliers are already contending with rising costs for raw materials and congested supply chains.

France-based TotalEnergies, among the winning bidders in the New York Bight auction, said its new lease could offer capacity of 3GW, more than three times the capacity cited by Boem in its description of the area ahead of the auction.

“We spent $ 800mn – people think it’s a lot of money,” Patrick Pouyanné, TotalEnergies’ chief executive, said last week. “It’s not a lot of money when you think. . . production is for 50 years. ”

Now that the New York Bight ocean blocks have been auctioned, there will be “robust” competition between wind developers as they submit offers to supply New Jersey and New York with electricity, said Doug Pfeister, managing director of the Renewables Consulting Group, although project costs could eventually filter through to utility customers.

The prices paid were high, he said, but they also “reflect a very large market for offshore wind between New York and New Jersey”, the most populous metropolitan area in the US. The Bight was “a very attractive place to develop offshore wind right now”.

In January, the governors of New York and New Jersey announced a “shared vision” that included a commitment to procure 16.5GW of power from offshore wind by 2035, creating thousands of jobs and cutting the states’ carbon emissions in the process.