The cabinet of Pakistan’s new prime minister, Shehbaz Sharif, was sworn in on Tuesday as his coalition of erstwhile political rivals prepared to fight calls for elections from Imran Khan, who was ousted from office just over a week ago.

Sharif, head of the Pakistan Muslim League-Nawaz, was chosen as prime minister by parliament after Khan was ejected from office in a no-confidence vote brought by an assortment of disparate parties including the PML-N.

But the new 34-person cabinet, made up of ministers from across parties who until recently were opponents, faces daunting challenges. Pakistan is struggling through one of its worst economic crises in years, with double-digit inflation causing widespread distress, along with concerns about its foreign debt obligations and the future of a $ 6bn IMF program.

Khan, who was elected in 2018 and ruled with a slim majority, has been holding rallies across the country demanding fresh elections as he claims he was the victim of a US-backed conspiracy to remove him over his ties with Russia.

National elections are not mandated until mid-2023 but many analysts expect that the new government will be forced to call early polls as it grapples with the economic situation and Khan’s allegations.

Fahd Husain, a political commentator for the Dawn Media Group, said the future appeared uncertain for both the government and opposition. “The government only has two alternative options to carry on until the end of parliament’s term next year,” he said. “Either they provide an alternative way forward, that’s able to tackle all the challenges, or they’re able to exhaust Imran Khan.”

From the PLM-N, Miftah Ismail, a Karachi businessman, was named finance minister and Ahsan Iqbal planning minister, with responsibility for Beijing’s $ 60bn Belt and Road investment, the China-Pakistan Economic Corridor. Both men have previously served in the same positions.

Hina Rabbani Khar, a former foreign minister with the Pakistan People’s Party, was appointed as junior minister for foreign affairs. But Bilawal Bhutto Zardari, the party’s leader and son of assassinated former prime minister Benazir Bhutto, was not in the cabinet with officials saying he would be brought in as foreign minister later. 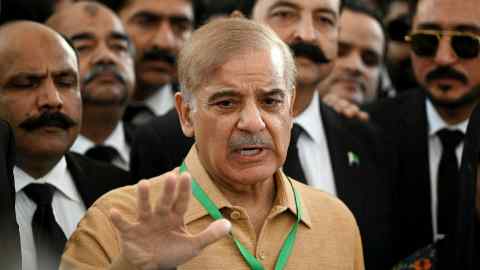 The new government has taken charge as Pakistan faces disagreement with the IMF over the future of its loan program. Sharif has said he will not remove fuel and electricity subsidies introduced by Khan this year, which have raised the annual fiscal deficit above agreed levels.

Some analysts argue that Khan’s anti-American rhetoric is playing well among many Pakistani voters, with nearly three-quarters responding that they considered America an “enemy” in a poll conducted this month by Gallup Pakistan.

Khan’s public rallies have attracted large crowds in cities including Peshawar and Karachi, with another gathering planned in Sharif’s hometown Lahore on Thursday.