US private equity group TPG is spotting increasing opportunities to invest in fast-growing technology companies after the sector was hit hard at the start of the year by investor fears over rising interest rates and Russia’s invasion of Ukraine.

“There are many good companies that are going to look for capital,” Jon Winkelried, TPG’s chief executive, told the Financial Times.

“If you look at the long arc of private equity, these kinds of disruptions in the market have been associated with very good investment opportunities,” he added.

Winkelried’s comments came as TPG released its first quarterly results after it went public in January, in one of the few large stock listings of the year. TPG’s earnings were bolstered by rising assets under management as institutional investors increased their investments in private capital, as well as brisk asset sales that raised the group’s performance fees.

In the fourth quarter, TPG’s publicly traded corporation generated fee-related earnings of $ 91mn, a 20 percent increase from the previous year and $ 137mn in after-tax distributable earnings, a metric analysts favor as a proxy for firm cash flows. For the full year, TPG generated $ 326mn in fee-related earnings and $ 538mn in distributable earnings, increases of 44 per cent and 131 per cent, respectively.

The group’s rising earnings came as it sold $ 25.4bn in assets during the year and brought in more than $ 20bn in new investor commitments.

However, they also reflect TPG’s novel structure versus competitors Blackstone Group, KKR and Apollo Global, which all listed their shares in the years around the 2008 financial crisis.

Private equity groups typically charge their investors a 2 per cent management fee in addition to taking a 20 per cent share of investment profits.

Due to TPG’s novel structure, the most lucrative parts of its business remain with company insiders.

On a GAAP basis, which accounts for TPG’s overall earnings and not just its publicly traded entity, the group generated nearly $ 5bn in revenues and a net profit of nearly $ 1.6bn. Employees inside TPG earned $ 940mn in compensation and benefits, and $ 2.6bn in carried interests.

TPG’s IPO has set the new standard for listings by buyout groups and spurred a new wave of private equity offerings in a similar structure. London-based CVC Capital Partners has decided to list its shares in Amsterdam, while US-based L Catterton has hired bankers to begin the process of going public, sources recently told the FT. 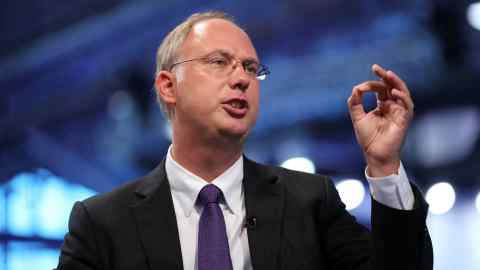 TPG’s listing this year came as market volatility put a damper on public offerings. “The IPO market is essentially shut down,” said Winkelried, who added that less accommodative capital markets could play to the group’s benefit.

“Though we are going to be in a choppier environment, the frothiness in the public market and the Spac market was a competitor to us,” he said.

Winkelried expects TPG to be an active acquirer of publicly traded companies, or carve-outs of business units from large conglomerates. He said deal activity will probably be muted until corporate boards start to accept lower valuations.

“It takes some time to see expectations change,” said Winkelried. “When you go through a disruption, there is a moment when deal activity slows. Then the bid-ask spread starts to adjust. ”

With additional reporting from Kaye Wiggins and Arash Massoudi in London