Schools exams will go ahead in England this academic year but with adaptations and a full return to “normal” assessments not expected until 2023, as teachers warned that government guidance had come too late.

Pupils sitting GCSEs and A-levels in 2022 will be given advance warning of exam topics, a wider choice of questions and supporting materials, such as formulae sheets, according to Department for Education plans released on Thursday.

But some teachers, who have been waiting for clarity from the government since before July when the last term ended, said that while the changes were “sensible” they had come too late.

Advance information on next year’s exam content will not be released until early 2022, limiting the time pupils, especially those who have fallen furthest behind, can benefit from the further assistance.

“It is frustrating that it has taken to this point — deep into the autumn term and with ongoing Covid-related disruption in schools and colleges — to set out the shape of exams for which young people are studying,” said Geoff Barton, general secretary of the Association of School and College Leaders.

Ofqual, the exams regulator, said it viewed 2022 as a “transition” between this year and a “normal” period. It added that it expected grading to return to pre-pandemic levels by 2023 following record grade inflation this summer.

Paul Whiteman, general secretary of the National Association of Head Teachers, a trade union, said guidance for teachers had arrived too late.

“We have pressed for months for the government to provide information by the start of the autumn term on its contingency plans,” he said. “By the time these decisions are finalised, we will be halfway through the autumn term.”

Nadhim Zahawi, appointed education minister after Gavin Williamson was sacked following a cabinet reshuffle this month, said officials had put “fairness at the heart” of their approach to exams and were “committed to rigorous standards being fairly applied”.

For the past two years students have received teacher-assessed grades after exams were cancelled due to the pandemic. Attainment has increased since 2019 with nearly half of A-level student receiving top A or A* grades this summer. 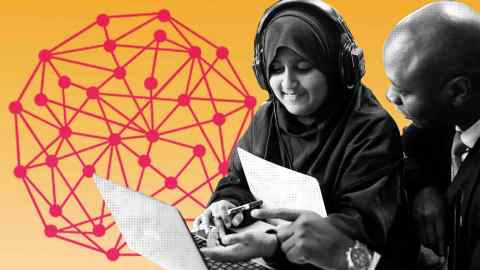 Jo Saxton, chief regulator of Ofqual, said the additional exam support this year would provide a “safety net for those who might otherwise just miss out on a higher grade, while taking a step back to normal”.

The government decision on exams follows a series of scandals including a disastrous attempt in 2020 to base assessment on a computer algorithm, which soured relations between the schools and the DfE under Williamson.

Teachers are also concerned about future disruption to education as Covid rates rose among the 5-14 age groups increasing by 80 per cent in the week leading up to September 19.

“This aim must be on the basis that this academic year does not see the levels of disruption to teaching and learning which has happened for the past two years,” said Whitehead.

But should that happen “we would expect future plans to be discussed and reviewed”.