Rugby union’s governing body is considering external investment to fund the sport’s growth in the US ahead of the men’s and women’s World Cups in the early 2030s.

World Rugby is set to confirm next month that the US will host the men’s tournament in 2031 and the women’s in 2033, having entered exclusive negotiations with USA Rugby for the country to host the competitions for the first time.

Alan Gilpin, chief executive of World Rugby, said the Dublin-based governing body would invest in increasing the popularity of the sport in the US during the years leading up to the tournaments, potentially with the backing of external investors.

“Can we be clever and fund growth with other people’s money? You know, to put it bluntly, if we can, great. But then the question is, what part of the return on investment are you potentially passing over to a third party?

“We need to help USA Rugby. . . fund participation programs and competitions through schools, colleges and universities [and] getting their own [teams] playing in competitions, ”Gilpin told the Financial Times. “It’s an investment in the whole spectrum, from grassroots through to elite sport.”

Rugby is the latest sport to target the US, as it tries to grow beyond traditional markets. Racing series Formula One and England’s Premier League have reaped benefits from expanding into the US, despite previous struggles to compete against domestic sports. The US is set to co-host the Fifa football World Cup in 2026.

Gilpin, who has prioritized the women’s game, highlighted the rise of the US women’s team in rugby sevens, a shorter and faster version of the main 15-a-side game. “We’ve got 10 years to do in the women’s game what has taken a lot longer in the men’s game, in terms of professionalizing the sport,” said Gilpin. “The women’s game can be the lead here [the US]. This is not about the women following the men, this is about women absolutely being at the forefront. ” 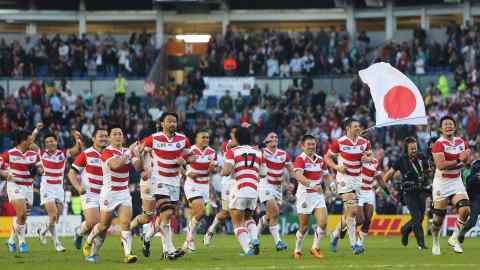 In a sign of interest from global companies, tech consultancy Capgemini last month agreed to sponsor a program to accelerate the growth of women’s rugby, in addition to its backing of the women’s World Cup later this year. “It does not make sense to only sponsor men’s sports,” said Virginie Regis, chief marketing officer at Capgemini.

World Rugby did not hold a bidding contest to determine the host of the early-2030s world cups, instead it set out to make rugby more popular by targeting the US as a growth market.