Mounting evidence of atrocities against Ukrainian civilians allegedly by Russian troops has stalled Turkey’s efforts to mediate a ceasefire and broader settlement between the two countries, a senior Turkish official has said.

Ibrahim Kalin, a senior adviser to Turkey’s president Recep Tayyip Erdogan, told the Financial Times that the horrific images of dead civilians in towns such as Bucha and Borodyanka had affected Ukraine’s willingness to continue negotiations.

In Ankara’s strongest condemnation yet of the killing of civilians, Kalin said: “We are all outraged by the pictures of. . . human rights violations and possible war crimes. ” He added that the atrocities risked stalling the resumption of negotiations, “especially on the Ukrainian side”, saying they would “maybe take a break for a few days and then regroup”.

“The developments on the ground, pictures coming out of Bucha and now a few other places, make it of course more difficult for the negotiations to continue as before,” Kalin said. “The Ukrainians are devastated, as we all are. . . these are really horrible, completely unacceptable, inhumane actions and whoever has done that should be brought to justice. ”

However, Kalin said Turkey, which has hosted the highest-level Russian-Ukrainian talks since the invasion began on February 24, was encouraging both sides to continue negotiations. Turkey’s defense ministry was also engaging with its Russian and Ukrainian counterparts to secure the evacuation of civilians from the besieged southern city of Mariupolhe said.

“We have to give a chance to diplomacy and it is important to continue to talk to the Russian side,” he said. “I personally am not expecting a major breakthrough over the next couple of days or even maybe a week or so. But maybe in a week or two we will see some movement again. ”

Turkey, a NATO member with close ties to both Kyiv and Moscow, hosted face-to-face talks last week between Russian and Ukrainian officials in Istanbul after a first round in Antalya. Following those discussions, the parties had agreed to meet again in Istanbul, Kalin said.

After Russian troops were stopped in their advance on Kyiv by Ukrainian forces on the outskirts of the capital, Moscow said during last week’s negotiations that it would scale back its military activities in the area in what it described as an attempt to build “trust”.

But as Russian forces pulled back from the capital’s suburbs, Ukrainians discovered the bodies of many civilians killed on the streets of towns such as Bucha, north-west of the capital. The US and the EU – which are skeptical of Russian president Vladimir Putin’s willingness to engage seriously in peace talks – responded by imposing more sanctions on Moscow.

Kalin, who is also presidential spokesman, said Russia appeared to be as concerned about the economic impact of western sanctions as it was about its military operations. “They suffered a lot of losses there [in Ukraine]but the economic losses are beginning to have an impact on the overall economic situation and policy thinking, probably, ”he said.

He added that there would need to be “some kind of a mutual, gradual process of managing the sanctions package”, suggesting Moscow would want sanctions relief if it took steps towards ending the conflict. “From the Russian point of view, that’s the only way they will probably make concessions,” Kalin said.

Talks have focused on neutral status for Ukraine and the security guarantees it expects in return. Ukraine is insisting on guarantees from the five permanent members of the UN Security Council and other countries, including Turkey and Germany, to prevent future attacks.

Kalin said discussions on a security guarantee were still at an early stage, but said “in principle we look at it favorably because we want to support Ukraine and we want to end this war”.

“We’ve had this discussion with Ukrainians, with the Russians,” he said. “We had some discussion with the Americans and the French, but there are lots of military details that need to be worked out by our militaries before we put our signature on it.”

Kalin said that while details of Ukraine’s demilitarization were still being worked out, there was a “wide gap” between Kyiv’s and Moscow’s positions on the matter. 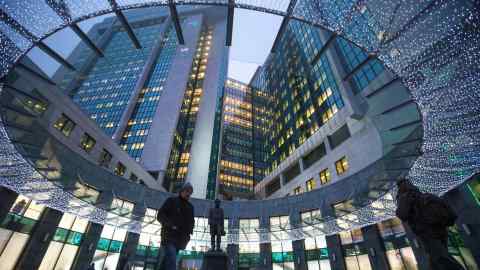 “The main Russian concern is that Ukraine should not have any fire capacity that may pose a threat to Russia,” he said, saying that meant “things like long-range missiles.” He added: “Ukraine wants a strong, serious military, with the normal capabilities of any army of any sovereign country.”

Kalin said security guarantees and territorial issues regarding Crimea and the eastern Donbas region “are the remaining two main issues”. He said Russia had not made its demands clear beyond recognition of its annexation of Crimea, which Turkey considered an “unrealistic, maximalist demand” that neither Ukraine nor the international community would accept.