Samsung Electronics has forecast its highest first-quarter operating profit since 2018 on strong smartphone and microchip sales, but the positive projections failed to dispel growing concern about its technological edge against rivals Apple and Taiwan chipmaker TSMC.

Chip prices held up better than expected in the first three months of 2022 despite the gloomy global economic outlook, high inflation and the impact of Russia’s invasion of Ukraine on tech device demand.

Operating profit at the world’s biggest smartphone and memory chipmaker was estimated at Won14.1tn ($ 11.6bn) in the three months to March, a 50 per cent rise on the same period in 2021. It comfortably exceeded a Refinitiv SmartEstimate average of analysts’ expectations of Won13.3tn. Sales likely rose 18 per cent year on year to a record Won77tn.

But Samsung shares are down about 11 per cent in the first quarter, underperforming a 7.4 per cent decline in the benchmark Kospi, as performance issues with its flagship Galaxy S22 smartphone, launched in February, raised concerns that the South Korean group was falling behind Apple on hardware competitiveness.

Investors have also raised questions about Samsung’s growth strategy in the wake of group scion Lee Jae-yong’s release from prison and US tour last year.

“There are question marks over Samsung’s technological prowess and its future,” said Lee Seung-woo, an analyst at Eugene Investment, citing delays to the improvement of its foundry business.

Users have complained that Samsung automatically activated the GOS [Game Optimisation Service] app, which slows performance to preserve battery life and prevent overheating, for resource-heavy activities such as gaming.

Almost 2,000 Galaxy customers have filed a collective lawsuit in South Korea seeking compensation from Samsung and accusing the company of exaggerating the S22’s performance.

The country’s competition watchdog is investigating the GOS feature, which has drawn accusations of performance throttling and possible violations of South Korea’s advertising law after the company marketed the G22 as providing the “best performance ever”. Samsung is also facing lawsuits in the US and Israel related to performance issues.

Analysts did not expect the GOS controversy to dampen Samsung’s overall smartphone sales, as it mainly affected higher-end device consumers and gaming enthusiasts. Sales of the S22 were 20 per cent higher than the device’s predecessor thanks to stronger camera features and higher telecom subsidies. 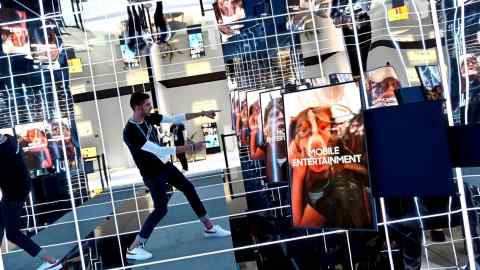 But analysts said the GOS issue represented a setback for Samsung given the reputational damage to its brand.

“Samsung still needs to maintain the trust of its tech-savvy fans, who place high value on transparency and control,” said Bryan Ma at IDC.

He added that the South Korean company was not alone in facing throttling complaints: Apple faced a backlash about slower performance in 2017, as did Chinese smartphone maker OnePlus last year.

“The common thread across these is the need to be transparent with users when throttling, so it’s unfortunate that Samsung missed the memo on this as it rolled out the S22.”

#techFT brings you news, comment and analysis on the big companies, technologies and issues shaping this fastest moving sectors from specialists based around the world. Click here to get #techFT in your inbox.