Sturgeon asks SNP to trust her on independence referendum strategy

Join myFT Daily Digest to be the first to know about Scottish independence news.

Nicola Sturgeon has told her ruling Scottish National Party to trust her that a second referendum on independence is imminent – but gave no new details on timing or how she hopes the British government’s refusal to approve a vote keur, to overcome.

In her speech at the SNP’s online autumn conference on Monday, the prime minister reiterated plans for a ‘legal referendum’ by the end of 2023, allowing for the crisis, and insisted that it was not up to the British Conservative government to to decide constitutional future.

“People in Scotland have the right to make the choice,” Sturgeon said. “Trust me – the time for that choice is approaching.”

However, many SNP members are privately deeply skeptical about the chance of holding a repeat of the 2014 referendum in the next two years, in which voters in Scotland remain 55-45 per cent in the UK. And some members are frustrated with what they see as Sturgeon’s extremely cautious strategy to force such a vote.

British Prime Minister Boris Johnson has said he will not approve a second independence referendum, while his Scottish secretary, Alister Jack, last month suggested that one be allowed only if the poll consistently shows that 60 per cent of Scots wanted it.

The British government insists its approval is needed for any Scottish independent House of Assembly, but Scottish ministers and some legal experts have argued in the past that Edinburgh could unilaterally hold an advisory referendum on the issue under current devolution law.

Disturb announced earlier this year plans for legislation to pave the way for such a referendum, but she does not want to say when she wants to pass the bill through the Scottish Parliament at Holyrood or how she would react if it were blocked in the courts.

The SNP leader, who led her party to a landslide victory in the Holyrood election in May and now commands a formal majority in the final parliament through a power-sharing agreement with the Scottish Greens, ordered officials last week to start working on a renewed cause for independence.

In her speech on Sunday, Sturgeon did not mention a conference vote in which SNP delegates called for the decision on when to hold a referendum, based on ‘data-driven criteria’, that the coronavirus crisis is over.

Instead, the prime minister tried to contrast the SNP’s values ​​with those of Johnson’s conservatives, saying her government was rolling out more generous benefits to low-income families while the British administration cut them. 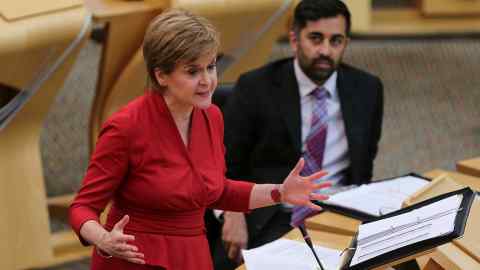 She also criticized the British plans to invade people helping asylum seekers in the country.

“I look forward to the day our asylum and migration policy is decided here in Scotland, not by a government in Westminster that sees it as an opportunity to show how difficult it is, rather than how much it cares,” he said. Sturgeon said.

In response to the speech, the opposition Scottish Conservatives accused Sturgeon of devising a ‘wild conspiracy theory’, claiming that the British government would inflict the economic damage inflicted on Brexit that Scotland could not afford to be independent. not.

‘Instead of focusing on the NHS crisis and protecting jobs, Nicola Sturgeon invented her own nationalist Project Fear. To divert her attention from the domestic failures of the SNP is increasing its divisions, ”said Donald Cameron, Scottish secretary of the shadowy constitution.