Two former pension ministers have called on the government to provide assistance to the most vulnerable, as they struggling to cope with rising energy bills and with inflation expected to rise above 6 percent.

Senior Conservatives acknowledge the issue is of growing concern to Tory MPs. “It just started,” said one. “Some people want the triple lock to be reset.” Ministers say they are ready for parliamentary trouble.

Tory MPs are already urging Sunak to take a range of measures to ease cost of living, including lowering VAT on energy bills, suspending “green levies” on fuel bills or scrapping planned tax increases in April.

Since 2011, people have received protection for their state pensions below the triple lock, which guaranteed an annual increase based on inflation, average earnings growth, or 2.5 percent, whichever is higher. The Conservatives have pledged to uphold it in the party’s 2019 general election manifesto.

Under the triple lock, the state pension would have risen more than 8 percent in April, thanks to a Covid-related anomaly in average wage growth, surpassing Goldman Sachs’ expectation of 6.8 percent annual inflation in that month.

But Sunak, under pressure to find savings, suspended the wage element of the triple lock for one year; instead, the state pension will rise by 3.1 percent in April, based on inflation in September 2021.

Sir Steve Webb, Liberal Democrat pension minister from 2010-2015, said the government should reconsider the suspension of the triple lock, which benefits 12 million state pensioners – many of them Tory voters.

“The government must accept that a 3.1 per cent increase does not even meet its own stated goal of protecting pensioners from increased living costs and think again about the April increase,” says Webb, now a partner with LCP, ‘ an actuarial firm. consultant.

“Energy costs in particular form a larger part of the budgets of older people and they will find it extremely difficult to absorb these costs without cutting back on heating or other essential expenses.” 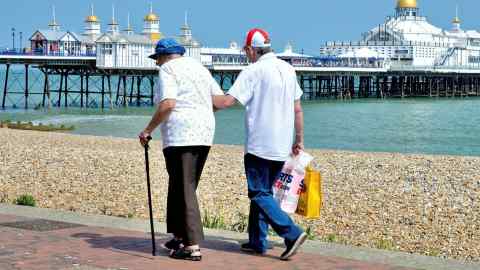 Baroness Ros Altmann, Conservative pension minister in 2015-2016, this week called on the government to take emergency action to ease inflationary pressures on the poorest pensioners, warning that without help the numbers of elderly people suffering this winter or die, likely to rise sharply.

“The government’s response must include urgent plans to increase the uptake of pension credit and enable pensioners to afford to heat their homes with reduced rates or increased benefits,” she said.

The government said: “We recognize that people are coming under pressure with the cost of living and we want to ensure that pensioners receive all the support to which they are entitled. We continue to encourage those who qualify for Pension Credit, and the wide range of other benefits it can offer, to file a claim. ”

A spokesman said the energy price limit, winter fuel payments and a £ 500 million household support fund would help low-income households through the winter.