British Chancellor Rishi Sunak has unveiled fresh details on Britain’s proposed post-Brexit financial regulation, promising a new era where officials will consider “growth and competitiveness” while overseeing everything from the world’s oldest banks to fast-growing fintechs.

Sunak also outlined plans for increased parliamentary scrutiny by both the Prudential Regulation Authority, which is part of the Bank of England, and the Financial Conduct Authority, a separate agency that regulates the financial services industry.

The suggestions – part of a consultation open until 9 February for feedback – build on Sunak’s Mansion speech in July, promising more agile post-Brexit financial regulation that would take greater account of City’s potential to boost the UK economy’s long-term growth rate.

“Today’s proposals will support the future strength of the UK as a global financial center, ensuring a nimble and dynamic approach to regulation that supports the growth of the UK economy, without deviating from our continued commitment to high international standards, “Sunak said.

The UK is facing a delicate balancing act as it undertakes the huge task of recreating EU financial rules at national level. Ministers want to make the UK attractive, but without embracing light-touch regulation that will enable firms to take risks that will ultimately hurt themselves or their clients. Such an approach would make it more difficult to do business internationally from the UK.

“The proposals reflect the recognition that the continued growth of the financial services sector is an international endeavor,” said Monica Gogna, head of UK financial regulation at EY Law, the legal business advisory arm of Big Four firm EY. She added that the UK clearly “wants to stay at the forefront” of financial regulation.

Officials stressed that the new goal for the FCA and the BoE to “consider both the implications for growth and international competitiveness of their regulations” could give the UK an edge over the EU because regulators in Brussels do not have a mandate for growth to consider.

The Treasury said examples where the new rules could make a difference include a more flexible implementation of the double-volume restriction in the wholesale capital markets regime and reforms to the issuance of prospectuses. 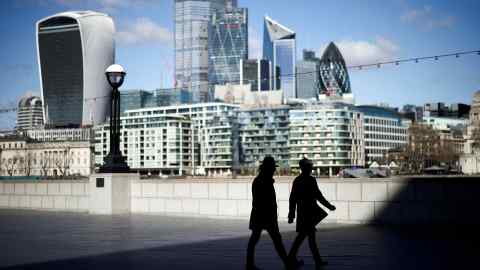 “At a very high level, it’s moving in the right direction,” said a senior executive at a major U.S. bank, adding that “the government has the message”. The person added that the most important thing was “how [the approach] calibrated ”and whether measures such as increased parliamentary oversight have been used to hold regulators accountable.

A senior manager at another major US bank said they would be closely monitoring specific aspects, such as how the UK is reviewing the EU’s fund management system, Mifid.

“The underground question for [financial services] companies are ‘What’s going to change, when, and what should I do?’ ”says Bob Penn, a partner at law firm Allen & Overy. “The paper largely outlines how the framework will change, but we need a roadmap for that process.”

UK Finance, which represents around 300 firms across the industry, said the proposals rightly seek to balance the improvement of the UK’s international competitiveness while ensuring that we maintain the highest regulatory standards.

But Barney Reynolds, global head of the financial services industry group at law firm Shearman Sterling, said: “The UK can and must move much faster to capture the benefits of a reorganized regime.” He argued for a greater role for the courts in enforcement actions to “ensure objectivity as to whether regulator rules are made predictable and enforced”.

Samsung shook its gadget businesses to focus on chips