The end of sick days: has WFH made it harder to take time off?

When Rachel * got Covid, her employer expected her to carry on working remotely rather than take a sick day. “I was very, very tired,” she says. “[It] was very difficult to focus. ” The special needs teacher based in the south-east of England delivered her lessons from home to pupils in the classroom, helped by a teaching assistant. “You felt that if you did not do it, you were letting people down.” Her difficulties were compounded by the weak school internet connection and some challenging behavior from students.

It was a stark example of the way tools introduced in the pandemic to help isolating students and teachers have transformed working life. Zoom calls, email and Slack channels have facilitated work during lockdowns and made it easy for employees to stay at home if they had Covid, but they have also made it harder to take sick days.

Elizabeth Rimmer, the chief executive of LawCare, a charity that supports good mental health in the legal community, has joined numerous webinars and virtual meetings in recent weeks attended by people struggling on with Covid. “They did not look good. [People] can lie in bed with their laptop and power through even if they are unwell. ” Jane van Zyl, chief executive of Working Families, an advocacy group, says: “We have to be mindful that the lesson from the pandemic is flexible working, and not working round the clock.”

This is an important issue for employers. Anne Sammon, employment partner at Pinsent Masons, the law firm, has received increasing numbers of inquiries from organizations that are worried about employees’ digital presenteeism. “They want to set the right tone over expectations. The challenge from an employer’s perspective is how to strike the balance. What you want [managers] to say is, ‘Use your common sense.’ But that does not give people clarity. ”

It is not just that technology makes it easier to work from our sick beds, but also that remote and hybrid working could weaken bonds between colleagues. Research has found that employees who have “social support” are more likely to disclose their illness and thus reduce the pressure to work.

The data is still emerging on the effect of widespread remote working on sick days. Last year in the UK, the Office for National Statistics reported a record low in the number of days people were absent from work. It dropped from 3.1 per cent of working hours lost due to sickness absence in 1995 to 1.8 per cent in 2020. The ONS said that furlough and remote working, preventing the spread of viruses such as flu, were likely causes for the drop. While the Chartered Institute of Personnel and Development, a trade body, found the overwhelming majority of respondents (84 per cent) had observed “presenteeism” – when people come to work when ill.

In the US, one survey in 2020 found workers were less likely to take time off due to homeworking and the belief that it would be frowned upon by their employers. Pre-pandemic research on a Chinese company with a remote workforce also found that employees took fewer paid sick days because they worked from home.

Some employers have responded to the new pressures experienced by employees working remotely through the pandemic by giving staff additional days off to look after their wellbeing, notably LinkedIn and Hootsuitewhich both gave staff an extra week.

Sick pay is key to encouraging workers to take time off. This was underlined in February, when Boris Johnson, the UK prime minister, instructed workers to be like the Germans and become “disciplined about not going into work when you are sick”. He was criticized for ignoring the fact that statutory sick pay in the UK is meagre compared to Germany, where employees receive full pay in the initial weeks of their illness. Past research has found that efforts to reduce absences, for example, by reducing sick pay, could increase presenteeism and ultimately “lead to more illness and lower productivity”.

Yet the pandemic has shifted employers’ attitudes to sickness, according to Laura Empson, professor in the management of professional service firms at Bayes Business School, City, University of London. “It’s becoming possible to say I need a break for mental wellbeing, it’s not that it’s OK to say but at least it’s being said. Things that were unthinkable pre-Covid are at least possible but not yet acceptable. ”

Clients realize that if someone is working when not well, it can be counterproductive and impact employee engagement, says Sammon. While Alun Baker, chief executive of GoodShape, a wellbeing company, says: “The personal, corporate and financial risk of working when physically or mentally unwell is significant.” This should encourage employers to propagate a culture that “ensures employees do not feel pressured to work at all costs”, he adds.

We have to be mindful that the lesson from the pandemic is flexible working, and not working round the clock

The problem is that policies relating to sickness absence are only effective if they are properly communicated to staff and understood. The key is making line managers understand the risks of allowing employees who are ill to carry on working, as well as managing workload to reduce the pressure on staff who are unwell.

Remote working adds another layer of complexity by making it harder to monitor employee wellbeing. “When someone comes into the office and is visibly unwell, you can pull them aside,” Sammon says. “When they are remote, you might not speak to them all day.” Mental health problems can be harder to pick up, though signs might be logging on at strange hours, or not engaging. “We are seeing a real focus on training managers to be better managers,” says Sammon.

Sam Rope, vice-president of human resources in the UK and Ireland for Adecco, the recruitment group, says the company leaves individuals to determine whether they are fit to work for the first seven days, which “ensures that there are no onerous reporting requirements ”, And encourages“ managers and leaders to lead by example ”.

On concerns around presenteeism, Maria Karanika-Murray, associate professor of occupational health psychology at Nottingham Trent University, points out that the word may be too blunt a term to be useful. In a research paper, she describes it as “an adaptive behavior aimed at meeting work and performance demands during impaired capacity owing to ill-health”.

She suggests seeing it as a continuum of behavior from restorative, helping a worker to keep in touch with colleagues, providing some stimulation, to dysfunctional, hampering both health and performance. There is a difference between “functional presenteeism” and behavior that is harmful. She makes a case for challenging the assumption that it is always negative. Just as organizations have started to realize some stress is useful to performance, while too much is overwhelming and too little under-stimulating. “There is an optimal middle for performance,” she says.

In a flexible hybrid work situation, inevitably some of this is down to workers’ judgment. “In an ideal world, if there are enough options for flexible work, we might not need sick leave,” says Karanika-Murray. “It will all be about adjustments.” 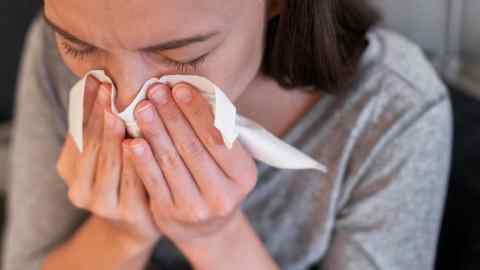 One consultant who worked through Covid symptoms says she found it useful to continue running a project. “Ironically, the adrenaline from the campaign actually helped clear my head.” However, she would stay away from the office when unwell, even if experiencing minor ailments. “I felt it never makes sense to take a cold or bug [and] get my colleagues ill when you run a company with a small team. ”

Much depends on the culture of the workplace: the examples set by senior executives, the jibes made about slacking off or bingeing on streaming services. Ultimately it comes down to trusting employees to take time off when they need it and not abuse the flexibility.

Organizations do not usually plan effectively for sickness cover, which could alleviate the guilt and stress associated with taking time off. “We do not look at the whole team to see what skills are complementary so that if someone needs to take time off that [they] aren’t overloaded ”on their return, says Karanika-Murray.

For Rachel, the special needs teacher, the difficulties of remote learning while sick have forced her and co-workers to come up with different solutions. “It’s made me say more about how we set cover and what resources are available when we are too sick to think about anything but ourselves. We are set in our ways about how we teach. It might not mean we teach the way we [usually] teach. ”

* Not her real name