The Future of Dinosaurs — detective work and untold discoveries to come

When I was a child, there were basically five dinosaurs: Brontosaurus, Stegosaurus, Triceratops, Diplodocus and T-Rex. There were more, of course, but I hadn’t heard of them; they were specialist creatures, known only to palaeontologists. Almost four decades later, my children could probably name dozens. And they’d be barely scratching the surface of what we now know about these prehistoric creatures.

The discovery of new species has accelerated at a staggering pace, in part thanks to advances in techniques and technology, and thanks to there being more researchers than ever.

“We have been naming anything from 30-50 species a year for the last 10 years, getting on for one a week,” writes Dr. David Hone in The Future of Dinosaurs. As a result, our knowledge of these prehistoric beasts has exploded. “Dinosaurs now number well over a thousand species.”

The extravagant size and mysterious extinction of dinosaurs spark childish wonder. Yet Hone, a paleontologist and lecturer at Queen Mary, University of London, shows us that they’re worthy of very serious study too.

Given the way fossils form, many species of dinosaur are lost; we can only guess at the ones we’ll never know about

The Future of Dinosaurs recounts what is essentially an elaborate detective story. From mere fragments of fossilized bone, scientists have built a vivid picture of the 180mn-year-long Mesozoic Era when dinosaurs roamed the Earth, an era stretching from 252mn to 66mn years ago, divided into three major periods: the Triassic, Jurassic and Cretaceous .

The Moon then was closer to Earth (it has been slowly inching away from us since its formation 4.5bn years ago), making nights brighter and tides higher. Continents drifted apart, volcanoes erupted, sea levels rose and fell and plants changed radically.

Starting with their eventual extinction, Hone’s book takes pride in every aspect of dinosaurs’ lives. He considers dinosaur anatomy, behavior and the preservation of their fossils. The leaps of imagination and deductive reasoning involved in deciphering old bones is fascinating.

In 1822, English doctor Gideon Mantell found a handful of large, leaf-shaped teeth in Sussex. From their shape, size and serrated edges, he deduced with remarkable accuracy that they were from a large land-based, reptile-like animal that ate tough plants, and he named it Iguanodon (meaning “iguana tooth”). Although Mantell did not know it at the time, Iguanodon was only the second dinosaur ever discovered. It would be another 20 years before Richard Owen, an anatomist who later founded London’s Natural History Museum, would coin the name “Dinosauria” on the basis of just three animals.

Geology and paleontology were nascent fields in Mantell’s day, known collectively as “undergroundology”, and the business of unraveling prehistoric mysteries clearly caught the public’s attention. The great French anatomist Baron Georges Cuvier, a contemporary of Mantell’s, was even name-checked by Sir Arthur Conan Doyle in a Sherlock Holmes story. These logical deductions – despite leading “undergroundologists” into a few cul de sacs along the way – have opened up our understanding of how and why organisms evolve, thrive or go extinct.

The aim of modern paleontologists is much the same – to “rewind the clock on fossils” – although the methods at their disposal are rather different. Leaps in technology such as DNA analysis, microscopes capable of identifying prehistoric fossilized pollen grains, and the ability to locate where animals might have fed based on isotopic traces in tooth enamel have revealed previously unknown details. We now have a better idea of ​​the color of feathers, the structure of bones, and what their skin might have looked like. 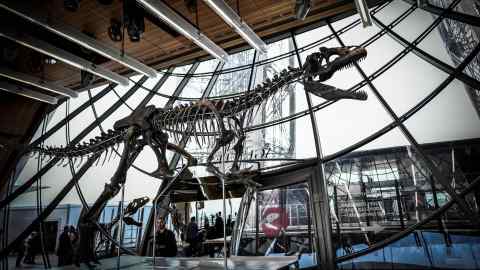 But given the way fossils form – dead dinosaurs needed to have been covered quickly with silt, sand or mud to avoid decay and allow the fossilization process to occur – many species are lost. “We have a frustrating lack of data in key areas,” writes Hone. “We have huge numbers of animals from deserts and almost none from islands or rainforests.” Since rainforests today are one of the most biodiverse environments on the planet, we can only guess at the species we’ll never know about.

Because of what Hone calls these “preservational biases”, we probably have a skewed impression of these fascinating creatures. Still, as the book’s title suggests, there is much we do not yet know that we probably will in the near future. Hone ends many chapters looking ahead “happily”; as the pace of discovery shows no sign of slowing, there are many more dinosaurs and their secrets out there awaiting discovery.

The Future of Dinosaurs: What We Do Not Know, What We Can and What We’ll Never Know by David Hone, Hodder & Stoughton £ 25, 272 pages