Photo sessions can feel quite embarrassing. Keep your face forward, arms still, try not to imagine how it is going to turn out. At a photo shoot last year, the demands of the photographer and my own flexibility could be plotted on separate graphs. But recently, when the camera faced me, and the photographer issued their usual order (“Yes, stay that way now”), I could not care less. In fact, I was proud.

The difference this time was that I was standing between two women. It was not just their literal presence, which diluted the intensity. The purpose of the shoot was clear in my mind. We were there to announce the play adaptation of my novel, small crab, which is currently being performed at the Hampstead Theater in London. Standing next to them – director Katie Mitchell and playwright Miriam Battye – was strangely affirmative. One of them said as much as we stood there. “It’s important,” she said. “It’s the shoots that matter.” It was empowering, just like the whole project was.

What I appreciated were the mere facts. We were working on a project that was feminist, assertive, powerful. There is nothing extraordinary about women being creative. It is the creativity, the work, that is extraordinary. But there was a defiance in the three of us standing there. A challenge, partly in everyday life, in business, in each of us going on, working, getting things done.

There is something that is expected and slaughtered in reservation and reverence. In correcting someone with a veil of linguistic qualifiers; in authority exercised with meekness and in the underestimation of achievement. But I was proud – is proud – and especially at that moment there was no hesitation in the feeling. 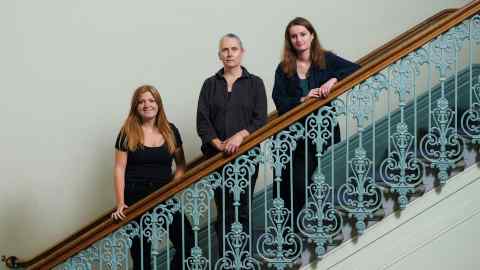 I grew up in a very male household, with three brothers and no female cousins, so maybe I have more appreciation for female alliance. There is something in common about working from a shared understanding. Men have long been labeled as simple geniuses, women as support. But here we were, each of us a separate authority. The topic of small crab only emphasized the importance. The book tells a day in the life of a woman who works as an admin assistant, recovering from a recent assault, and trying to find the words to express what happened to her. Together, director, adapter, writer, we built a platform for this character and there was something that moved in that experience.

What has not been said is the way we fit into the texture of her world. The novel (and now play) challenges the dark, uncomfortable, all-too-familiar experience of being a woman: the claustrophobia of powerlessness, the treacherous sexism and misogyny that change how we negotiate the world and how we are allowed to walk through it. A woman knows what it is to be a woman, and in the process of putting the novel on the shelves, there was never a need for grounding or context. The question was just how to bring it to life. It was a release. I approved the script, came in rehearsals to talk to the actors or take them on a research trip, but I was able to stay apart. I trusted them.

I was recently struck by something a writer, who used to work high in advertising, told me. The first thing she had to learn, she said, was how to present views in such a way that the men could talk it back with the belief that they were their own. Without conflict she could get the job done. Needless to say – or is it a euphemism for when someone has to hear something, but softly, as if by accident? – that some men do not suffer from this ego and can work from a place of understanding. But it seems telling that as I write this column, I’m already thinking of the comment section.

When the play was announced, I was asked a lot how it feels. Eyebrows are raised. There was an expectation that I would be worried, that it was a “baby” that I should be protective of, careful for his safety in other people’s hands. But I never felt a bit of it. Why would I? Two talented women worked on my novel. It was exciting.

I never expected when I wrote small crab how the book would continue to travel after I finished. Writing is a lonely thing, necessarily. Transferring it to the stage was a wonderful, heartbreaking shift. Of course, there are many people who work to get the novel into readers’ hands, but reading remains an intimate experience. Suddenly, here I am in a theater, actors and technicians working on the gear while watching the laughter and silence of the audience.

Most nights I think of the actors when they are about to go on stage. I recognize 19:45 as a meaningful time. Give to move fast and tell me: they are on! It is surreal to ride a bike somewhere at home, in the bar, only to be caught by it. I am reminded each time of how my book has brought me into the company of numerous people I admire. But there’s something else, something that’s hard to pin down, that I can just feel. I felt it as I looked down at the photographer’s lens and I felt it time and time again through the process. The play allows me a separation: it gives me a slow-shutter view. I can recognize their work, and I can recognize my own in it.

Rebecca Watson is the FT’s assistant art editor and author of “little scratch” (Faber). The play is on until December 11 at Hampstead Theater, London