A U.S. jury has found three white men guilty of the murder of Ahmaud Arbery, a 25-year-old black man who was shot last year while jogging in Georgia in an incendiary incident. racial justice protests across the US.

Father and son Gregory and Travis McMichael, as well as their neighbor William “Roddie” Bryan, were found guilty of murder and other charges on Wednesday. The case garnered widespread media attention last year after a video of the shooting circulated online, sparking outrage.

The verdict comes days after the Kyle Rittenhouse’s acquittal, a white teenager who killed two men during civil unrest in Wisconsin last year after the shooting at another black man, Jacob Blake.

The incidents expose the deep rifts in a country that for more than a year is struggling with tense debates over race and justice George Floyd’s murder. In an indictment published in April, the U.S. Department of Justice alleged that McMichaels and Bryan intimidated Arbery because of his “race and color.”

The three men are facing charges of, among others, false imprisonment, intentional murder, aggravated assault and criminal murder, which carry a minimum sentence of life imprisonment.

The McMichaels argued that they were carrying out a citizen’s arrest after they suspected Arbery had robbed a house in their coastal neighborhood in Georgia, while Travis McMichael said he shot Arbery in self-defense.

Prosecutors objected that Arbery was unarmed, and that the legal criteria for a citizen’s arrest were not met. They also noted that the murder took place after the three men pursued Arbery with pickups and rifles.

President Joe Biden said in a statement: “Ahmaud Arbery’s assassination – watched by the world on video – is a devastating reminder of how far we must go in the fight for racial justice in this country… Nothing can Mr. Arbery bring back to his family and to his community, but the verdict ensures that those who committed this horrible crime will be punished. ”

Federal authorities have charged the three men separately with hate crimes and attempted kidnapping in connection with Arbery’s murder, which took place in February last year.

Arbery’s deaths, along with the murders of Floyd and Breonna Taylor, sparked widespread protests in the U.S. last year and intensified investigations into law enforcement. 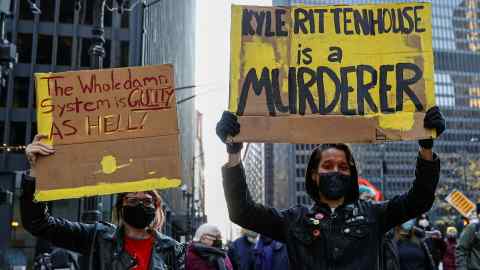 The case unfolded in parallel with Rittenhouse’s trial, which sharply divided public opinion. The 18-year-old was driving from neighboring Illinois to Kenosha, a town on Lake Michigan, after a police officer shot Jacob Blake, paralyzed him and caused civil unrest. Rusten Sheskey, the officer who shot Blake, was not charged with a crime.

Rittenhouse testified during his trial that he was there to protect property and provide first aid, and said he carried an assault rifle to protect himself. He shot three men, killing two and wounding a third amid confrontations with a crowd.

Republican lawmakers and conservative commentators have welcomed the 18-year-old’s acquittal and see the result as a confirmation of Americans’ second amendment to the U.S. Constitution, which allows people to “hold and carry weapons.” The judge in the Rittenhouse case dismissed a firearms charge shortly before the trial ended.