Hundreds of UK egg farms are at risk of collapse after surging input costs were pushed up still further by Russia’s invasion of Ukraine, the industry has warned.

The British Egg Industry Council said on Thursday that input costs had risen by about 30 per cent after the war worsened a steep rise in feed prices, since both Russia and Ukraine are major exporters of raw materials such as cereal grains that are used to feed chickens .

It has written to the chief executives of UK supermarkets calling for consumer prices for eggs to increase. The British Free Range Egg Association said the price of a dozen eggs should immediately rise by 40p.

The typical price of six medium eggs was £ 1.35 a decade ago but had since sunk to about £ 1, said the council.

The price of feed had risen by about 50 per cent in two years to £ 400 a tonne, said the industry council, while costs for young chickens, transport, energy, labor and packaging had also surged, leaving many egg producers operating at a loss .

Andrew Joret, chair of the council, said: “The tidal wave of cost increases will see many family farms, many of which have been producing eggs for generations, going under in a matter of days, unless something is done quickly.”

The British Free Range Egg Producers Association joined the call, saying that farmers had been “cut adrift by an unrelenting squeeze on their profit margins, which have now been completely eroded in many cases”.

Free-range producers have also had to contend with the UK’s worst-ever outbreak of avian flu. In response to that, the government has required all bird keepers to keep birds indoors and follow strict biosecurity measures since late November, meaning that their eggs can no longer be marketed as “free range”.

Free-range producers have contacted all the major UK supermarkets in recent months to call for improved rates to be paid to egg farmers, but did not receive replies, the association said. 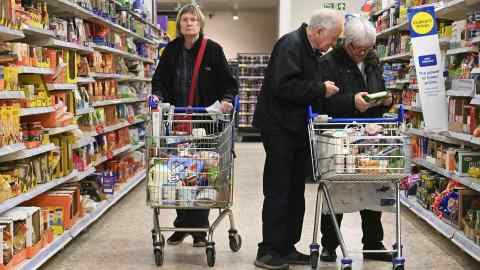 “There have been small rises in the prices of eggs in shops, but that money has evaporated before it gets to the farm gate,” said Robert Gooch, the association’s chief executive.

Prices paid by packers to egg producers stood at 87.7pa dozen in the last quarter of 2021, official data show, higher than prices paid the previous year but similar to rates paid as long ago as 2014. The UK produces about 11.3bn eggs a year and imports another 1.4bn.

Energy costs have been a particular burden, with wholesale gas prices up 250 per cent since the start of 2021, said the council.

Eggs are the latest food to be affected by input cost inflation, which has tested UK retailers’ ability to keep prices low. Historically, the UK’s food prices have been among the world’s lowest in relation to total household budgets.

The UK’s largest producer of chickens, 2 Sisters Food Group, warned earlier this month that food price inflation could reach 15 per cent by the middle of the year.

Waitrose, the supermarket, said: “For our own-label egg farmers, the amount we pay varies according to the cost of feed so that we protect them against rising costs. We are also paying our branded eggs suppliers more to support the increased costs of production. ”