A minority stake in a new £ 20bn nuclear power station on the east coast of England will be sold to institutional investors or sold on the stock market under plans by the British government to drive China’s CGN out of the project.

The government concludes an agreement that will force state-owned CGN to give up its 20% stake in the proposed Sizewell C nuclear plant in Suffolk.

According to the plans, the government would hold the stake until it could be sold to institutional investors, according to people informed of the situation. Another option to drive the stock on the stock market is also being explored, these people said.

The Financial Times reported in July that British ministers were investigating ways remove CGN of future nuclear projects in the UK, including the Sizewell plant, following a cooling of relations between London and Beijing.

The change of mood at the top of the government means that ministers are now expected to block CGN’s plans to build a nuclear power station at Bradwell in Essex.

Under an agreement with the government dating back to 2015, CGN will pay 20 percent of the development costs for the Sizewell plant, with the option to participate in the construction once investment decisions are finalized.

EDF, the French energy group, which owns the remaining 80 per cent stake in Sizewell, hopes to use a financing model, the ‘regulated asset base’, to build the 3.2 gigawatt plant.

This model would mean that households start contributing to the cost of the plant through their energy bills long before it generates electricity.

The business department confirmed that talks with EDF on the CGN interest are ongoing and that legislation to enable the use of the regulated asset base financing model will be submitted to parliament next month.

“CGN is currently a shareholder in Sizewell C to the point of the government’s final investment decision,” the statement said. “Negotiations are continuing and no final decision has been made.” EDF and CGN declined to comment.

CGN is funding a third of the Hinkley Point C nuclear power plant under construction in Somerset.

The project is led by EDF, and both Hinkley and Sizewell will use French-German European Pressureized Reactor technology.

CGN’s Taishan nuclear power plant in southern China was the first in the world to use EPR technology and more than 100 of the company’s engineers were involved with Hinkley. 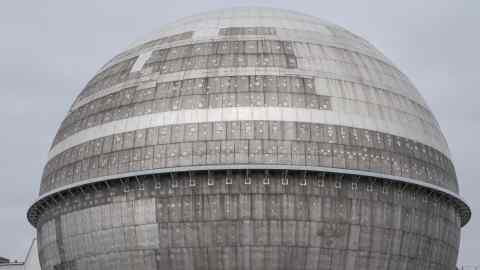 Britain’s civilian nuclear program, which has been delayed for years, is in the spotlight after a recent rise in wholesale gas prices that has raised questions about the country’s future energy security.

Ministers hope that the US nuclear company Westinghouse, together with the construction group Bechtel, will continue with plans for a nuclear power plant at Wylfa in Anglesey, on a site that was abandoned by the previous owner Hitachi.

The government has separately allocated £ 215 million to develop a fleet small modular nuclear reactors in Britain.

A consortium led by Rolls-Royce has raised money to pursue its design for regulatory assessment.

Relations between London and Beijing have become increasingly tense over the past few years over issues, including China’s repression of disagreement in Hong Kong.

This has led to a new assessment of Chinese involvement in the UK, with a greater sensitivity to investing in critical infrastructure.

The US blacklisted CGN for export in 2019, alleging that it stole US technology for military purposes.