Suffolk residents had objected to the projects being developed by ScottishPower, the UK arm of Spanish utility Iberdrola, because of the design and location of the onshore infrastructure needed to connect them to Britain’s electricity grid. This includes a large substation complex in the medieval Suffolk village of Friston, 22 miles north-east of Ipswich.

Energy executives and some climate campaigners have warned that if not planned carefully, the amount of onshore infrastructure that will be required to speed up deployment of clean electricity projects in Britain could become a new battleground with communities.

Earlier this month, the Prime Minister set a goal to increase the UK’s offshore wind generation capacity fivefold to 50 gigawatts by the end of the decade, up from a previous 40GW target, as part of his new “energy security strategy”, designed to reduce the country’s exposure to volatile fossil fuel markets, including supplies of Russian oil and gas. 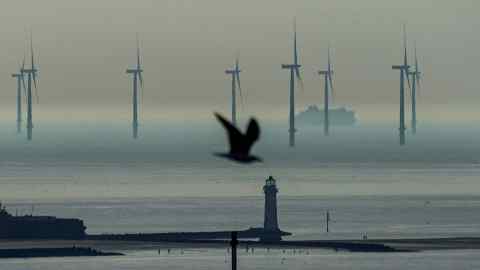 But campaigners in Suffolk argue the UK government needs to take a more strategic approach to how all of the new expected projects will connect to the electricity grid – and where.

Suffolk Energy Action Solutions (SEAS), a group organized by residents of the county, have sent a “pre-action protocol” letter to Kwarteng asking for a rethink before seeking permission to apply for a judicial review of his decision to approve the two ScottishPower projects.

Fiona Gilmore, who leads SEAS, said the approach to planning onshore infrastructure such as substations and large cables was currently “very old fashioned” as each project is dealt with individually, without thinking about how infrastructure could be integrated and reduced.

SEAS would like “hubs” situated on brownfield sites, where substations and interconnectors – cables through which electricity is traded with continental Europe – could be grouped together so as to avoid too many “concrete, monolithic” buildings and cables scarring the county.

It had proposed that the business secretary make a “split decision” on the ScottishPower schemes, known as East Anglia One North and East Anglia Two. Gilmore said this would have allowed construction on the turbines offshore to commence but would have permitted more time for a rethink of where cables and substations should be situated in-land.

“If your strategy [for onshore infrastructure] makes sense, then you’re going to get the communities to back you and endorse you and then you will not get held up with these judicial reviews, ”Gilmore said.

The east of England looks set to become a test bed for how much disruption to landscapes and local industries communities will tolerate from unsightly infrastructure in-land given the large number of new energy projects, including interconnectors, that are planned for the coast.

In 2021, Norfolk villagers succeeded in overturning approval for a large offshore wind farm being developed by Swedish energy group Vattenfall after objecting to a new substation required to connect the project to the grid. The same project was approved by the government for a second time earlier this year.

The Department for Business, Energy and Industrial Strategy declined to comment.