Steeply rising inflation is unlikely to knock the profits of housebuilders because house prices are climbing even faster, according to one of the UK’s largest builders.

Bellway, a top five UK housebuilder by number of homes built, said on Tuesday that spiraling house prices had offset the impact of inflation on the business as it reported pre-tax profits of £ 327mn for the six months to the end of January, a 9 per cent increase on the same period a year ago.

Despite the cost of particular building materials rising fast over the period and increasing wages, Bellway announced that its operating margin had increased from 17.3 per cent in January 2021 to 18.7 per cent this year.

“Costs pressures persist across the wider sector, but overall, cost inflation has been offset by house price gains,” said Jason Honeyman, the group’s chief executive, in the results statement.

Bellway sold its private-market homes for an average of £ 345,000 in the six-month period.

Honeyman expected that further inflation, particularly as a result of the war in Ukraine, could also be offset by price growth.

“Materials shortages, rising fuel prices and wage costs are expected to result in continued inflationary pressures in the year ahead, with these potentially exacerbated by the worldwide consequences of the crisis in Ukraine, although we generally expect these to be offset by further revenue gains, He said.

High demand and a lack of new housing are likely to push up house prices, said Glynis Johnson, an analyst at Jefferies. “Consumers have not been put off by energy costs rising, rates ticking up and costs rising elsewhere. Talk to housebuilders in the last two weeks and the biggest question is ‘can we get the materials?’, Not ‘can we pass on the costs?’, ”She said.

But Bellway could face a huge bill as a result of the government’s insistence that developers pay for building safety improvements on any block they have built in the past 30 years. Bellway increased its provision for “legacy building safety improvements” by £ 22mn to £ 187mn in January, but that figure only covers blocks built up to 12 years ago. 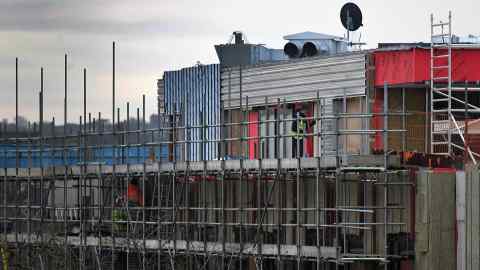 Builders are at loggerheads with the housing department over the total bill for repairing defects that emerged in the wake of the 2017 fire at Grenfell Tower, but Johnson suggested the sector would have to dig far deeper if the government gets its way.

“£ 22mn is relatively small. If [Bellway] goes to the Government’s 30 years there could be a significant increase in costs. . . Do I think it could be an extra £ 400mn? It’s aggressive, but I think it’s possible, ”she said.

Shares in Bellway were down 1.6 per cent to 2,559 pence in early trading on Tuesday.