US companies under pressure to support voting rights push

Activists are putting pressure on U.S. companies to support their pro-democracy rhetoric with tougher support for suffrage and changes to their political spending, arguing that businesses have lost focus on the threat to stability in the year since the Capitol attack.

The commemoration of the uprising by a mob that disputes Donald Trump’s election loss has sparked new warnings about the systemic risks the two Brookings Institution associates pose to companies and investors this week. baptised a “relapsed” American democracy.

A coalition including the Service Employees International Union and the Interfaith Center for Corporate Responsibility said on Wednesday that it had submitted lobby-related shareholder proposals to companies including Charter Communications, Eli Lilly and GEO Group, and racial equity decisions at Goldman Sachs, Pfizer and Home Depot.

“For workers and investors, the uprising has eased how corporate donations can support or undermine democracy and racial justice,” said Alphonso Mayfield, president of the Florida Public Services Union and a SEIU international executive.

There was “a level of lip service” in companies’ statements supporting democracy, he said, “but I think they are also struggling to figure out how it affects their long-term outcome.”

Renaye Manley, deputy director of SEIU’s division for strategic initiatives, said the January 6 attack crystallized for investors the risks of destabilization, but unions wanted to see companies’ political spending subject to more transparency and board oversight.

Citizens for Responsibility and Ethics in Washington, a liberal advocacy group, said this week that 717 companies and industry groups, including Boeing, Koch Industries and General Dynamics, have been donating to members of Congress since January 6 who objected to the 2020 presidential election results or to Republican committees supporting their re-election.

Others noted that only a minority of companies have broken their promises to suspend support for politicians who continue the idea of ​​a stolen election. About 80 percent of the executives who made such promises kept them, said Jeffrey Sonnenfeld, a Yale School of Management professor. “They do not support the wild, flamethrowers seditionists,” he said.

A conference board recording of executives overseeing companies’ political spending this week found that almost everyone expected the climate to be at least as harsh in 2022 as it was in 2021, while 42 percent prepared for it to be even more difficult.

However, less than one-third of respondents said they felt pressure on the subject from investors, compared to more than two-thirds who put pressure on employees.

“Too many companies and their leadership continue to act as if their politics and affairs are as usual. It is not, ”he said.

Daniella Ballou-Aares, head of a business coalition called Leadership Now, said she remained concerned that businesses had “forgotten the risks of last January 6”, but the renewed congressional debate on voting rights brought the topic back to the top of companies’ political agendas .

Chuck Schumer, the Senate’s top Democrat, was determined that the upper house of Congress would vote no later than Martin Luther King Jr.’s Day on January 17 to change his rules to pave the way for Democrats to stand alone. to enforce voting rights legislation. 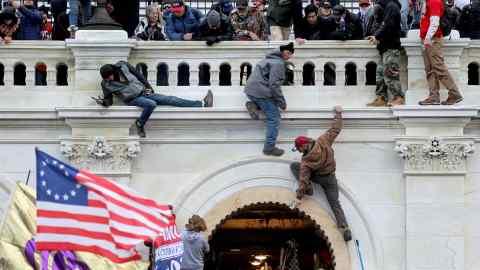 Many in Washington, however, remain skeptical that an agreement could be reached, given the continued stated opposition of at least two Democratic senators to the changes, which would require the support of all 50 Democrats in the upper house.

“If the legislation was clearer, then [CEOs] would step in behind Schumer, but it is very difficult to see what there is to stand behind, ”said Sonnenfeld of Yale, who held a virtual meeting of CEOs in December dominated by their questions and concerns about democratic stability. .

Ballou-Aares added that many companies have been deterred from speaking out by some Republican leaders’ accusations that “awake capitalists” should stay out of politics.

“It woke up the chief executive’s narrative and the idea that suffrage was a biased issue has gained some traction and created some concern among some CEOs,” she said: “I think we See that the traction erodes a bit. “