On the eve of the French presidential election, two new books by British historians ask: What’s so special about France? The question is a familiar one; their answers are very different.

For Graham Robb, it is the land that defines France’s uniqueness; its intricate patchwork of distinctive pays, each with its own singular history but also the friction between them and the centralized, primarily bourgeois, power of Paris. For Peter Watson, it is the nation’s long tradition of the salon, those fabled gatherings of writers and artists in the drawing rooms of the glittering intelligentsia of Paris.

Publishers know the value of mining the widespread fascination for France. It underpins the plethora of what Watson refers to in his introduction, as “cute books about France” which draw on, and perpetuate, the belief that the French are somehow luckier than the rest of us.

Like the child whose ease and charm is the envy of a grudging sibling, France makes us feel that we have it harder; that the great nation eats better, has better weather, better trains, grander and more varied landscapes, and of course more and superior sex than we do. True or not, there is a strong desire to rationalize these fantasies and although Robb or Watson’s books are not “cute”, they seem to spring from this desire and their sales will no doubt benefit from these stereotypes.

Robb’s France: an Adventure History is a rich and vibrant narrative that ranges from the Gauls to the yellow gilets. His clear-eyed but imaginative storytelling scrutinizes the more idiosyncratic features of France’s historical landscape, beginning with what he calls an “obscure act of genocide on a summer’s day in the late iron age” – Julius Caesar’s massacre of the Nervii in northern Gaul.

The account is based on Caesar’s own writing but infused with Robb’s infectious love of geography and nature. He begins with a detailed description of the soap, the impenetrable hedges that once offered the Gaulish tribes a “cloak of invisibility” against the enemy. Embedded in this chapter is the long view that the only history worth writing is that which seeks to read the traces we humans leave on these lands that we pass through so briefly. Thus, Robb’s research only partly took place in libraries; much of it was done criss-crossing the country for more than 30 years on a bicycle.

Watson, on the other hand, is what Robb dubs an “indoor historian” and his book The French Mind heaves with literary and philosophical research. An 800-page pavé – a particularly fat book or a stone you might lob at the riot police – it glides across three centuries, from the 1660s to the 1990s, in search of that most elusive of things, the mind of a nation.

I worried about the hubris behind the choice of title, which I hoped was that of his publishers. In his introduction, however, Watson proclaims the book’s argument: that the salon “comprised an informal but nonetheless sustainable, crucial and exceptional institution in European social-intellectual life, and at the same time help (sic) account for much that is definitive and characteristic of the Gallic mind. ”

My reaction to each of these sweeping histories of France was so different that I had to question what was drawing me to Robb’s narrative and making me feel uneasy about Watson’s. Apart from the folly of trying to distil a thing so inherently chaotic as the French mind, there was something concerning about the glorification of Watson’s subject; the salon being, for him, “what makes the French the French in all their glory, glamor and would-be grandeur”. This style of storytelling feels problematic, particularly during an election year that has been characterized by battles over the French historical narrative.

There is, inevitably, a touch of nostalgia attached to most historical writing. Robb’s is for a rural France free of high-speed trains and themed roundabouts; Watson’s is for the pre-digital, pre-dumbed-down panache and dazzle of France’s intellectual elite. Nostalgia is excusable when the chosen subject is fueled by affection – and a love of France does radiate from both these books. But when it comes to narrative history, love can no longer be blind. Since the digital revolution, the battle for control of “national narratives” has become more crucial than ever and as we watch the horrors unfold in Ukraine, any tendency to airbrush or glorify the past feels fraught with hazard.

Looking backwards to past glories to stoke feelings of “It was better before” is a tool used by both iterations of the French far right that have been slugging it out in this battle for the Elysée: Marine Le Pen’s Rassemblement National and Eric Zemmour’s newly formed Reconquest.

But the habit has also crept into Emmanuel Macron’s playbook. The president’s questionable decision to commemorate last year’s bicentenary of the death of Napoleon – a date that has gone uncelebrated by every French president since Georges Pompidou half a century ago – felt like a nod and a wink to the nationalist vote. Macron marked the occasion with a speech in which he praised Napoleon’s “fight against ignorance” and his “love of knowledge and history” but passed over his fight for territory and its associated death toll of at least 4.2mn. The effect of Macron’s speech was to make Zemmour’s habit of sanitizing the darker chapters of French history – including Robespierre’s Terror, Vichy and the Algerian war – feel dangerously mainstream.

A telling detail in the scenography for Macron’s speech was that he delivered it standing beneath the great dome of Les Invalides and in front of the tomb of Napoleon. Conspicuous by its absence was a conceptual art piece, a replica of the skeleton of Marengo, Napoleon’s favorite horse, which only the day before had hung suspended over the emperor’s tomb. The controversial artwork by Pascal Convert, clearly deemed inappropriate for the gravitas of the moment, was put back the day after Macron’s speech, much to the disgust of historian and Napoleon authority Pierre Branda, who called the piece “grotesque and disrespectful” and its presence in a “consecrated” space unworthy of “the Napoleonic legend”. It amounted, Branda wrote in a piece for Le Figaro, to “the deconstruction of French history” made possible by “evil thinkers” proud of their lack of culture.

Such venomous battles occur when we stop seeing historical figures as flawed human beings and turn them into legends. Amid such mythologising, the kind of history written by Robb feels particularly soothing. He humanises Napoleon by choosing for his source material the recorded experiences of the 13-year-old girl who befriended him during his final exile on Saint Helena. Betsy Balcombe, writes Robb, “was the sort of intelligent, independent child who makes rude faces behind the backs of boring visitors”. Boney enjoyed Betsy’s frank and irreverent company so much that he would become impatient when she was not around. “He keeps looking at the road through his spyglass,” wrote Gourgaud, one of his generals.

Watson is not wrong about the powerful legacy of the kind of grandiose intellectualism that flourished in France’s salons. To experience it, you only have to tune in to mainstream radio (France Inter) every weekday morning to Thomas Legrand’s “édito politique”, and listen to his highfalutin riff on the political life of the nation. My objection to Watson’s book lies not in its subject matter, nor so much in its conclusions, but in its storytelling.

Historians have a duty to write well, bringing history to life – but not as a glossy advert for the past for politicians to exploit

In the book’s opening section, “The Birth of the Salon and the ‘New Constellation’ of Women”, I was keen to discover the many interesting salonnières who had hosted these gatherings. His chapter on La Fronde, “the catastrophe that overwhelmed France from 1648 to 1653” defines the French aristocracy’s challenge to the power of the monarchy as, “more than most, a women’s war,” no doubt because one of its key players was Madame of Longueville.

Yet far from bringing her to life for modern readers, Watson lifts his portrait of her straight from a book published in 1957, quoting verbatim from Jeanine Delpech’s groundbreaking L’Ame de la Fronde: “It is impossible not to be impressed by the iron determination with which she dominated her husband, stirred up her brothers, quarrelled with them, won them back over. . . rode a horse across France, incited Normandy to rebellion. ”

As for the Marquise de Sévigné, whose 1,700 extraordinarily vivid letters to her daughter are part of the French literary canon, Watson tells us that she “must together with her daughter count as one of the most interesting women of the 17th century, with a range and depth unequaled even by many men. ” After this high praise, he gives us a brief overview of the key events in the writer’s life, including the death of her husband Henri in a duel over his mistress, and adds, “Marie never remarried. Despite being blond and beautiful she was, by some accounts, ‘sexually cold.’ ”Other salonnières are portrayed in a similar voice: Mme de Rambouillet was “theatrical” though “something of a prude”; Anne-Marie-Louise d’Orléans was “a prodigiously wilful girl and woman”.

As I read Watson’s pavé, it was not just the creative writing tutor in me inwardly chiding: Be precise! Less is more! Show, do not tell! It’s the sudden gravity of the role of the historian in a society where narrative now matters more than ever. When it comes to the writing of history, avoiding cliché, caricature, imprecision and generalization is no longer simply a problem of bad writing. Historians have a responsibility to write well, using their imaginations to bring human history to life in all its nuance and complexity. Not as a glossy advert for the past that can be instrumentalized by politicians for their campaigns, or weaponized by dictators for their wars. 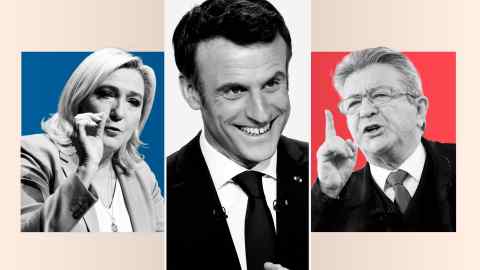 In the run-up to this election, my millennial Parisian kids have been complaining about what they see as the oversimplification of the “political discourse”. They lament how, since the last elections, candidates have dumbed-down their programs, reducing them to simple slogans that can be repeated to infinity to gain traction on social media. Coverage in print, on TV and online has adjusted to this new landscape by favoring shorter formats and journalists with less contentious interviewing styles.

Sound familiar? Peter Watson would no doubt be appalled by this enfeeblement of the French mind, and even Graham Robb would, I suspect, deplore this diminishing of French singularity, as our enviable neighbor slowly becomes, well, more like us.

Lucy Wadham is the author of ‘The Secret Life of France’