Volkswagen plans to build a new factory near its German headquarters, the company revealed on Tuesday, to produce a futuristic electric model designed to catch up with Tesla.

The second Wolfsburg plant will be dedicated to the production of VW’s Trinity, a concept car that the group hopes to bring to market from 2026.

It would be aimed at adjusting the efficiency of Tesla’s factory near Berlin to be able to manufacture a vehicle within 10 hours, VW said.

The announcement comes as the company’s leadership is caught in a bitter dispute with its powerful enterprise council, which represents the vast majority of the car manufacturer’s 290 000 employees in the country and in fact has the majority vote on its supervisory board.

Two weeks ago, the council accused CEO Herbert Diess of “behavior unprecedented in the group’s history” after privately proposing that VW have 30,000 redundant staff in Germany in the run-up to the group’s annual investment strategy. announcement.

Daniela Cavallo, the head of the works council, also attacked Diess’ constant comparisons of VW with Tesla and promised to protect every job at Wolfsburg – Europe’s largest car factory, which employs 60,000.

VW has indicated that it would be cheaper to build a new factory than to repair the existing premises to manufacture electric vehicles economically. It did not provide details of how much the plant would cost to build or operate. 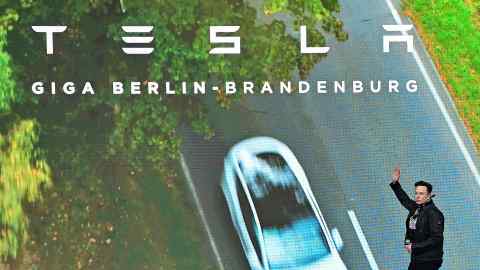 The new factory, which was endorsed by the works council, would produce 250,000 cars a year, in addition to about 500,000 already manufactured on the existing premises in Wolfsburg. Musk expects Tesla’s German factory to produce 500,000 vehicles a year once it operates at full capacity.

VW’s Trinity model will be fully autonomous, so-called Level 4 self-driving capability, though one must stay to take control of the vehicle if necessary.

Workers’ representatives still hope that one of VW’s current electrical series will also be built at the existing Wolfsburg facility.

“We are in talks with the works council about this,” says Ralf Brandstätter, CEO of the VW brand, “but the economic conditions must be created.”

VW’s supervisory board has yet to approve the plan. An announcement is expected in December.