We will send you a myFT Daily Digest e-mail to update the latest news from the International Monetary Fund every morning.

A war of words over the future of the IMF’s managing director Kristalina Georgieva will likely come to a point in the next few days while the fund’s board meets to investigate allegations that it manipulated data to favor China in a previous role.

The allegations relate to her time as CEO of the World Bank, a position she left to hold the top post at the IMF in October 2019. report commissioned by the bank’s board of directors, she was responsible for falsifying China’s scores in three business indicators to get it ranked in the 2018 edition of the bank’s annual report on Doing Business.

Georgieva denied the report’s findings and denied any wrongdoing. 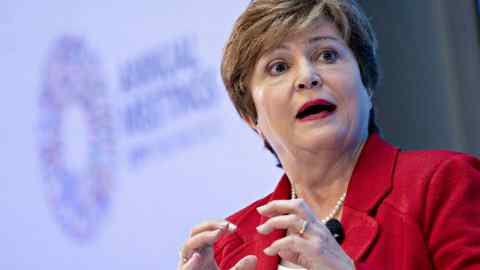 A group of 331 former World Bank employees wrote to the bank’s board on Thursday describing the report’s ‘unprecedented risks’ as a result of investigations by law firm WilmerHale.

“The findings should be addressed by the management of the bank and the board with decisive and substantive action to restore the public’s confidence that the bank’s data and the resulting statistical products are free from political and strategic manipulation,” they said. writing.

‘Otherwise, the public’s confidence in the activities, practices and policies of our institution will weaken.

The signatories of the letter, seen by the Financial Times, include one former managing director, two former executive directors and four former vice presidents of the bank, along with several other former senior bank officials.

The actions described by WilmerHale ‘form a form of institutional corruption’ and ‘represent gross abuse of managerial authority’.

A Georgieva spokeswoman said: ‘Kristalina has made the cause of multilateralism her life’s work. She has acted with integrity to support the institutions she serves and will not be deterred by these false allegations. ”

The IMF stopped asking questions from journalists about Georgieva’s time at the World Bank and referred it to a liaison officer, SKDK, who is being held by her.

Over the past few days, SKDK has distributed a series of statements in support of Georgieva, including two collections of tweets by prominent women and national leaders, and a statement by 16 Afrikaans finance ministers issued on Saturday.

“The allegations surrounding the World Bank’s report on affairs in 2018 are serious and need to be investigated,” the ministers wrote. However, we also believe that this must be done in a way that does not undermine the integrity of the IMF and, in particular, ensure a fair and equitable process.

Ministers praised Georgieva for her ‘integrity, energy and progressive advice’ and for her role in providing $ 30 billion to African economies during 2020 in the form of IMF loans.

Georgieva rejected the allegations in the WilmerHale report, saying she fundamentally disagreed with the findings and implications and that it was ‘not true’ that she had appealed to someone to deal with the Doing Business reports. .

She did not address the details of the allegations from the public out of respect, she said for reviewing the matter from the IMF board. The board is expected to question lawyers at WilmerHale on Monday about the report and hear Georgieva’s report of the events it describes on Tuesday.

The matter came at the traditionally the busiest time of the year for both the IMF and the World Bank, as they prepare for their joint annual meetings starting on 11 October.